Bhubaneswar: Chief Minister Naveen Patnaik on Sunday receives hero’s welcome on return to Bhubaneswar . CM Naveen Patnaik was given a rousing welcome at the Biju Patnaik International Airport here on Sunday when he returned after being awarded as the Best Administrator at the Outlook Speakout Awards ceremony in New Delhi.

Thousands of BJD workers and leaders thronged the airport to congratulate the CM. After arriving, Patnaik paid floral tributes to the statue of Biju Patnaik at the airport before leaving for the Naveen Niwas in a huge procession with thousands of party supporters lining up on both the sides of the road to greet him.
Patnaik addressed the media at the Naveen Niwas and said, “I would like to thank all the people who had come in such large numbers to the airport to greet me. I would like to express my deep gratitude again to the Outlook for having awarded me as the Best Administrator in the country.” 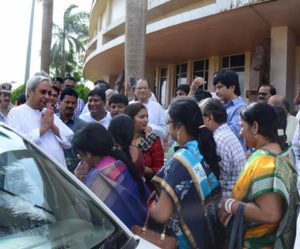 He dedicated the award to the people of Odisha and said, “This is for the four and a half crore people of the State and added, “We shall continue to strive to make Odisha the number one State in the country.”

Amid talks of mid-term general elections, BJD president and Chief Minister Naveen Patnaik on Sunday said they are always prepared to face poll anytime. Simultaneous elections have worked well for the BJD, he said. 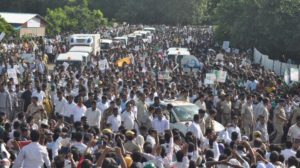 Patnaik, who returned from New Delhi, however, clarified that the BJD would retain its policy of equidistance from the Congress and the BJP, thereby putting latest speculations of a possible alliance between his party and the BJP to rest.