Mumbai: The country’s oldest and most popular music label Saregama India has started the new year with some desi tadka as they launch their newest single ‘Phoonk Le’ featuring the Indian television industry’s dusky beauty, Nia Sharma. Dancing to the beats of Rangon and to the voice of Nikhita Gandhi, it’s a visual treat to watch Nia Sharma dazzling her fans in a new avatar with her dance moves.
‘Phoonk Le’ is a Hindi single track written by Meer and Lado Suwalka and sung by the melodious singer Nikhita Gandhi. The number is composed by music composer Rangon. Phoonk Le has been creating a pulsating excitement around netizens and TV enthusiasts who are admiringly loving Nia Sharma as the Bijlee girl in the music video which is directed by Prince Gupta.
Nia Sharma says, “I grew up watching item songs like Chaiyaa Chayiaa , Chamma Chamma, Bidi Jalaile , Munni , Sheela ki jawani and always swooned over how stunning all those women looked in the songs. I never knew I’d be the one getting an item number like ‘ Phoonk Le’ I was killing myself thinking how I’d even pull it off, I rehearsed day and night as I am not a professional dancer. I went to extreme levels where I worked out immensely, stopped eating much and gave it my all. I am nervous, I hope my audience likes it & gives all their love and support to this song. I have jitters in my body & I am tripping on my own song, I can’t stop humming & dancing to the tunes.” 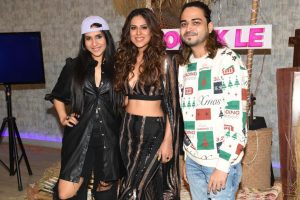 Nikhita Gandhi says, “Phoonk Le was a very fun song to sing. It has the spiciness, the tadka that you seek in a Desi track. Moreover, Rangon has composed the music so beautifully, I couldn’t have asked for a better song to start my new year with. I am glad that the listeners are enjoying the track as much as I enjoyed recording it I hope my audience showers it with all the love & support that it deserves.”

Rangon says, “Phoonk Le is a desi song that contains the essence of India and requires the best tadkedaar beats. So working on a song that demands all this was exciting, challenging and fun at the same time because I have never done an item song before. I am glad that Nikhita Gandhi did a killer job with her voice and also the entire team has done so much hard work in the song and it is getting the response it deserves.”
https://bit.ly/PhoonkLe