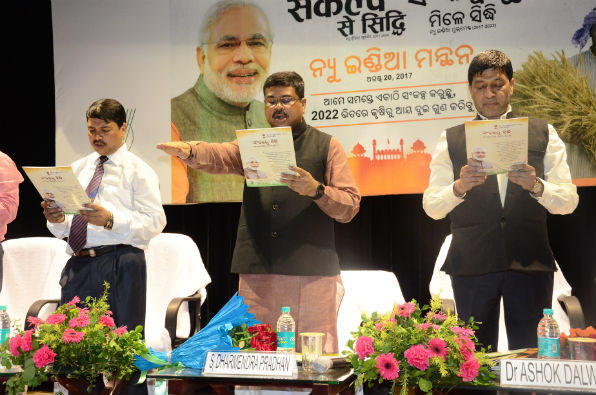 Bhubaneswar: Krishi Vigyan Kendra-Khordha under the ICAR-Central Institute of Freshwater Aquaculture, Bhubaneswar observed the “New India Manthan-Sankalp se Siddhi” on 20 August, 2017 at ICAR-CIFA, Kausalyaganga, Bhubaneswar, Odisha. The meeting was inaugurated by Shri. Dharmendra Pradhan, Hon’ble Minister for State (Independent Charge), Ministry of Petroleum and Natural Gas, Government of India. A pledge was taken on the occasion to double the farmer’s income. Shri. Dharmendra Pradhan Ji emphasised on the attempts taken by the government for the improvement of farmer’s income and welfare. The guest of honour of the meeting Dr. Ashok Dalwai, Additional Secretary and CEO, Department of Agriculture, Cooperation and Farmers Welfare, New Delhi spoke on the ways and means to double the farmer’s income. He has highlighted to adopt new technologies for increasing production and productivity from agricultural lands.

The gathering was welcomed by Dr. J. K. Jena, Deputy Director General (Fisheries Science and Animal Science), Indian Council for Agricultural Research, New Delhi. Dr. Jena said that the central scheme “Blue revolution” has been designed to increase fish production in the country and also to double the income of fish farmers. The seven point strategy to double the farmer’s income by the government was deliberated to the participating farmers by Prof. Damodar Parida, Retired Professor from Orissa University of Agriculture and Technology, Bhubaneswar. Dr. S. S. Singh, Director, ATARI, Zone-V, Kolkata told that all the KVKs will reach the farming community for passing this important message to farmers. Farmers from Khordha District, officials working in agriculture, horticulture, animal husbandry, fisheries departments of Odisha State attended the programme. During this occasion farmers were exposed to new technologies through display in an exhibition. Around 200 participants from different walks of life with agriculture as main activity attended the programme. Farmers who excelled in extending support to other farmers to improve their livelihood as master farmers and farmer friends were felicitated during the occasion. Dr. J. K. Sundaray, Director, ICAR-Central Institute of Freshwater Aquaculture, Bhubaneswar proposed the vote of thanks.