Music composer/producer Gulraj Singh left his marks in movies like ‘Ungli’, ‘Fukrey Returns’ and the popular devotional album ‘Ganaraj Adhiraj’. He has also worked for a television film called ‘Shaadi Vaadi And All That’ for the song ‘Dil Lajawab Hai’. In a recently released movie ‘Sardar Ka Grandson’ on Netflix, Gulraj has done the background score.

Sharing his experience with us, he says, ” ‘Sardar Ka Grandson’ happened to me last year when Kaashvi gave me a call about this project. Before that, we were talking about the song we did in ‘Shaadi Vaadi’ where she had given me a hint about this project. She also had told me things are on a halt due to lockdown and all. So we had a brief chat about the whole thing.

Kaashvi and I have worked together for ‘Shaadi Vaadi’, a television film which was released some years back on MTV. And undoubtedly, we both had a great experience having worked together. Kaashvi’s style of direction and the kind of music I had written for her film went all well. This is the first feature film she is doing and I feel humbled to be a part of this project.”

Gulraj’s journey in music started as a keyboard player from a very early age. He later went on exploring the bigger picture about which he informs, “I consider myself fortunate enough to have covered a wide range of gigs during that time being associated with rock bands. Since I was brought up in Thane, I used to do a lot of local Marathi shows over there where I got to know about the incredible Marathi music and musicians. Then I was then a part of a neo-classical band called ‘Defying Gravity.” 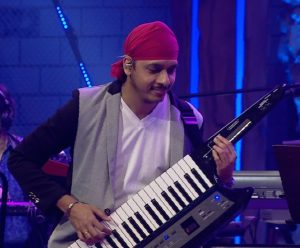 “As a keyboard artist, my first celebrity experience was with singer Kunal Ganjawala. Then the opportunity happened with Shankar Ehsaan Loy. For quite some years I was playing live gigs with them, simultaneously I was working for other composers as well. Then I was associated with Ranjit Barot Ji, eventually Salim-Suleiman. Since 2013, I am playing for AR Rahman sir which is another great experience. I was working as a keyboard player and composer with other music directors, but I always have had focus towards my compositions,” adds Gulraj.

Not known to many, Gulraj’s debut as a music composer happened with the movie ‘Tutiya Dill. About this, he says, “‘Tutiya Dil’ was my first film as a composer. I had done all the songs and BGM for it. My dear friend Manoj Yadav wrote lyrics for it. However, the film didn’t do well at the box office. But then ‘Ungli’ movie’s ‘Pakeezah’ song did well. I had sung and composed the song. I had done the theme track of ‘Ungli’ which is ‘Aadaraniya Ungli’.”

His devotional album ‘Ganaraj Adhiraj’ got him wide fame and recognition. “The album ‘Ganaraj Adhiraj’ was a dream project for me and Manoj. A friend of ours in Thane had a studio and wanted to an album by rearranging the existing Ganesha songs. But that idea didn’t work out. Then Manoj and I came up with the idea of making original songs of Lord Ganesha. The intention was to be completely transparent. From Hariharan Ji to Shankar Ehsaan Loy and Salim Merchant, Akriti Kakar, Siddharth Mahadevan etc., all have sung a track in it. It was a process of 3-4 years. This album got me that introduction as a composer/producer. I got the film ‘Ungli’ somewhat because of this album. ‘Ganaraj Adhiraj’ came in trilogy- 2011, 2012, 2013 respectively. The album opened a lot of doors for me and Manoj. We are also planning to reboot the album.

Music for me is very natural rather than a conscious effort. When you do independent music, its purpose is to bring your free expression to the forefront. Here, the artist in you goes through no filter. So it is very much pure in terms of intentions, and what you want to do. There is no director or producer to give you instructions. For example, there’s this album called ‘Ganaraj Adhiraj’ I had done with lyricist Manoj Yadav, which is an example of an independent project. And I am glad that a lot of people still appreciate it. I was composing and producing the way it was coming naturally to me. Manoj wrote the lyrics the way he felt. So there were no set of boundaries,” he informs.

Gulraj has been predominantly working as a music/BGM composer in the industry. When asked about his experience, he says, “Coming to the mainstream projects of BGM or song composing which I call commissioned work, because here we are catering to a particular movie or a series etc. Now there is a joy and excitement in that as well. So here you have to cater to the given situation with music as it has to carry forward the story. So you have the situation and sometimes references too. And in BGM, you are writing music that would add to the storytelling process. So it is taking the form of storytelling that the movie is trying to convey. Another thing is, at times your music takes turn according to the taste of the director as well.” 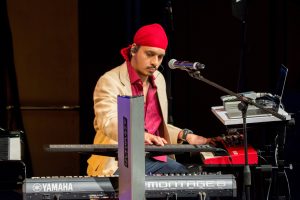 He adds, “I feel, writing music to comedy scenes is very challenging. There is a very thin line in making the music/film very caricaturish or cliche. So you have to be very subtle with the music as it should convey the humour. With ‘Sardar Ka Grandson’ it was very challenging to do justice to the comic parts as the movie parallelly carries a very emotional storyline. The BGM has to flow seamlessly with the duration of the film at multiple emotional, serious, and funny bits.

For me, a movie’s music is one sound, even though there are different composers, BGM, or songs. So I make sure I use elements of the songs in other related parts of the film adding to the storyline. That’s why I enjoy working for movies where I get to compose the songs and BGM as well. There are other projects where I am doing BGM, songs etc.”

“I strongly feel, BGM and songs, represent the sound of the movie. Well, the BGM score takes a longer duration. For ‘Sardar Ka Grandson’ I took a month. The time taken depends on the duration and requirement of the film. In addition to the music programming, we also record live instruments, singers/ backing vocalists which also add to the timelines. Some composers enjoy doing BGM more than songs,” he adds while quoting his latest project ‘Sardar Ka Grandson’.

Talking about his other projects, he informs, “There are two films that I have already worked on. One is ‘Paani’ directed by Addinath Kothare and produced by Priyanka Chopra. I have done songs and BGM both for it. The film won a national award last year. We are hoping it will be released on OTT or theatre considering the severity of the pandemic situation. There is another film called ‘Unaad’ directed by Aditya Sarpotdar. This film has five songs that I have composed where music is an important part of the narrative. During the songs, the story moves forward. I have composed also done BGM for the movie. There are other projects in the pipeline as well.”