The ‘Prada’ girl Shreya Sharma is back with ‘Ladka Baimaan’ that rhythmically conveys, ‘its time for the worthiest’. After trending on YouTube in less than a week, Shreya says, “As a musician, when people listen, like and appreciate my music I feel that that’s the greatest reward for me. I know that ‘Prada’ got lot of love and now ‘Ladka Baimaan’ is growing. I am happy that people are relating to it.

The whole process of the song was really interesting. Diesby and I have worked on a couple of songs together. We were jamming around the idea and the hookline of ‘Ladka Baimaan’ caught my attention and I immediately knew I was doing it. Initially, it was transitioning into a love song but we figured out from our experiences that it should be a song symbolising moving on, going from strength to strength.”

Shreya gives a big credit to lyrics for making the song audience friendly. She says, “The lyrics are the absolute attraction of the song. I have been getting countless feedback on it. Lyrics have acted in making this song audience friendly.” However, she also reveals that the bold and vibrant avatar in the video has happened because of the tireless efforts of the whole team. “I have never been a camera friendly person. So, I was really nervous, but luckily I had a great team to the support. The director of the video was very supportive. His wife being a choreographer helped me in getting my correct expressions, poses, angles etc. From DOP to the cameraperson, they all deserve the credit for it,” she informs. 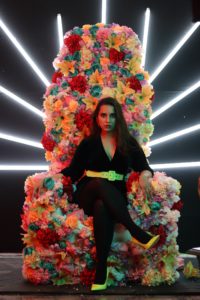 She, who has started her journey through an independent song, believes that the contemporary music videos are encouraging fusion and tradition and trend through fashion as well as music. “Its like we are growing an indigenous pop culture of India germinated and rooted here. Its very young, commercial and mainstream. Its coming from a culture, a country that has some beautiful jewellery includes, and I think that fusion is happening. Its high time that we should modernize Indian jewellery, clothes, etc and look at it from a different perspective. It works in such a way that at one instance I saw a fashion blogger wearing a leather saree which I found so cool. And the next thing I remember is buying a leather saree in Delhi. That’s how such promotion works,” says Shreya.

“Yes contemporary music is growing. Its happening that after a long time independent music is getting it’s due now. But I think the pop culture in India could grow more because masses in the whole country listen to Bollywood music. That’s a fact to celebrate,” concludes Shreya.

India is much ahead of Russia, France and UK in number of daily COVID tests conducted: Health Secretary