By OdAdmin On Oct 17, 2022
Share
More than 40 sessions related to discussions on language, music and poetry recitation, theatre performances held during the event

Kathmandu:  Kalinga Literary Festival Kathmandu Ends With A Literary And Cultural Extravaganza All The Way. Curtains finally came down on the first edition of  Kalinga Literary Festival Kathmandu   on Sunday with engrossing sessions by literary stalwarts and media personalities, captivating performances by artists, multi-lingual poetry recitals, book launch and discussions and much more. The festival made a humble attempt to deliberate on  “India & Nepal: Journey of Civilizations and Search for the Soul”, which was also the theme of the festival this year. 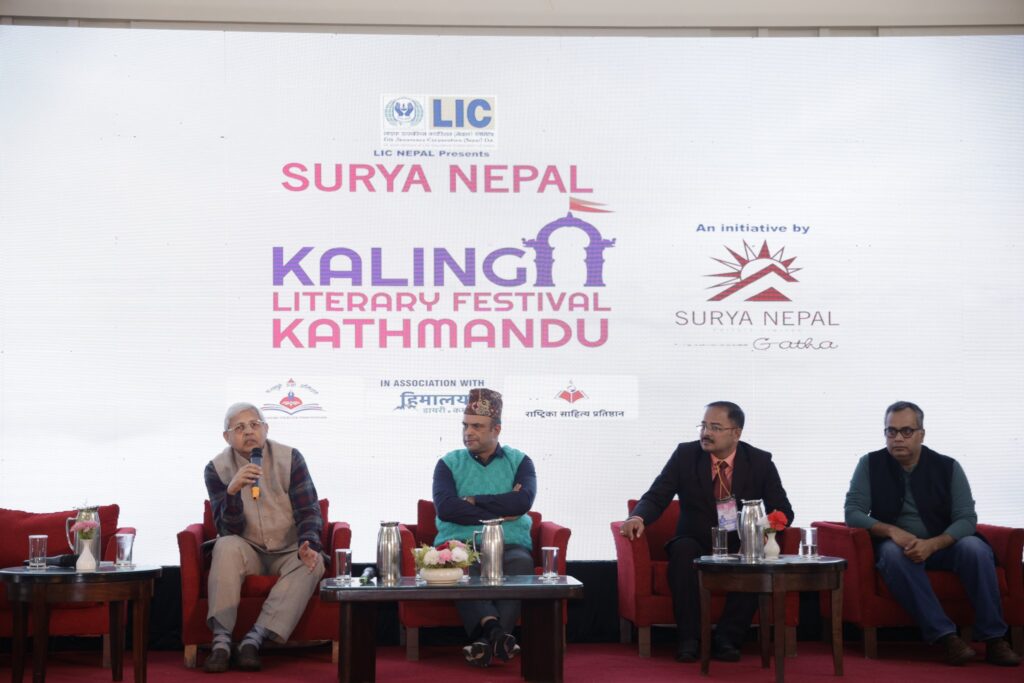 Kalinga Literary Festival Kathmandu   was spread over 35 engaging sessions ranging from literature to cinema, food, city life, economy and literature. Subjects such as  feminism, contemporary literature, arts and paintings, cinema, politics and government , journalism , cultural heritage, book publication business, religion and trade got featured by more than 350 eminent speakers from across the Nepal and India along with poetry recitations every day.
“We hosted over 350 literary and creative minds from Nepal and India . The festival has become an ideal platform for intellectuals and thinkers alike. We will be organising second  Kalinga Literary Festival Kathmandu  on September 1,2,3 , 2023 ” 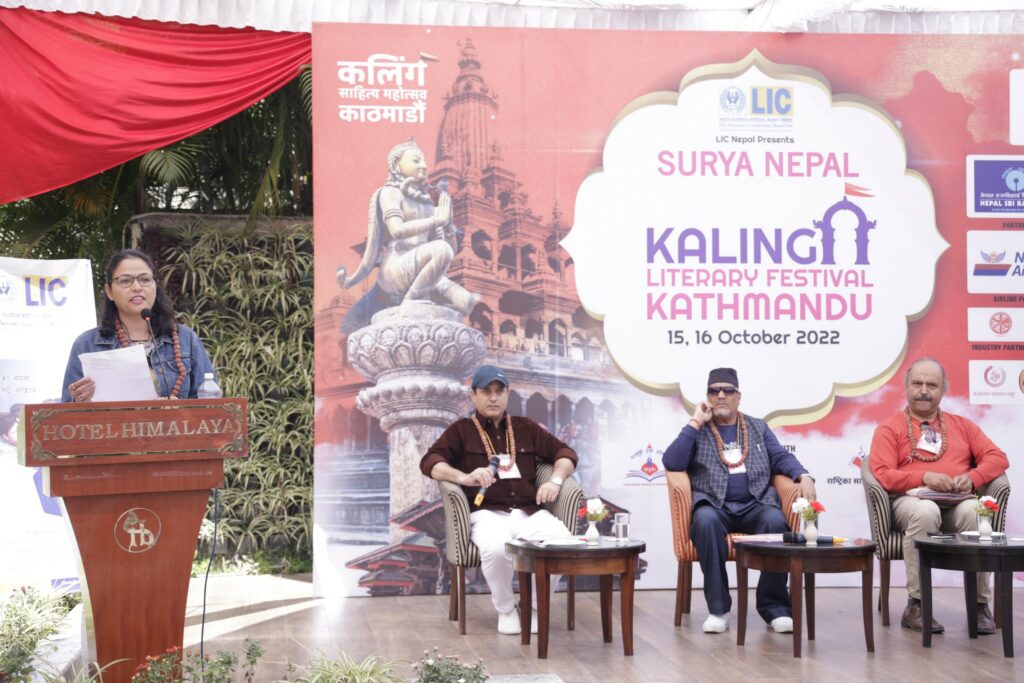 After the successful first day session, the second day of the Kalinga Literature Festival was conducted in 24 different sessions. On the second day, various poets gave their presentations in the poetry reading session in Nepali, Hindi and English languages. Poems were recited by famous poets of Nepal under the title of Footsteps of the Sun, while other poets including Ashok Vajpayee, a prominent poet of Hindi literature, recited poems in theme Kavita Ke Ilka Mein. Similarly, a Nepali poetry recitation session was held under the title of “Towards the light”.  In today’s session, various speakers expressed their views, especially on art, literature and social topics.
Titles “Women Spiritual Masters: Why they matter”, “Publishing in Digital Era: New Possibilities New Challenges”, “Importance and necessity of regionalism in writing”, “Revisiting Nepal in Indian Mystic Traditions”, “Women’s Writing: Challenges and Future”, “The Role of Media for strengthening Indo-Nepal Relationship”, “Spiritualism, Culture, Literature: The connecting points of Nepal and India”, “Society, Literature and Cinema”, “Present Situation of Nepali Critics” and “Indo-Nepal Art Traditions- Historical Reminiscence of Painting, Stone Art, Heritage, contemporary art” were discussed from different dimensions by personalities associated with this field.
The ardent writers of Bhojpuri literature, who participated in the session entitled Current Status of Nepali Bhojpuri Language and Literature, shed light on the importance of promotion of Bhojpuri language and Bhojpuri literature.
Former Ambassador of Nepal to Denmark Vijaykant Karna had a very interesting conversation with former Indian Ambassador to Nepal Ranjit Rae. The two former diplomats had a detailed discussion on the relationship between Nepal and India as well as current events and developments in the contemporary world. In response to a question asked by former ambassador Karn, ex-ambassador Rae said that he got to see Nepal and Nepalese closely in his professional life and also informed about the electricity trade between Nepal and India, inter-relationship between youth and Nepal-China relationship. Also, Rae discussed India’s attitude towards Nepal in the book Janayuddha  and the border states and trade expansion of Nepal. Similarly, Vyomesh Shukla’s conversation with writer Ashok Vajpayee discussed various aspects of literature. 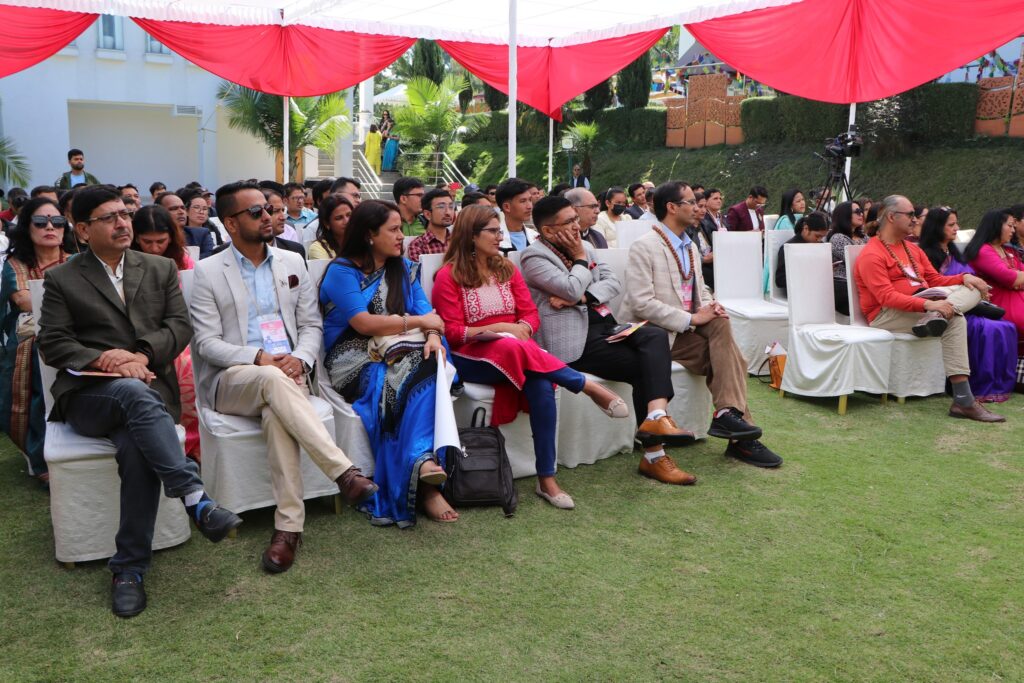 The main highlight of the day was the performance of a drama called ‘Ram Ki Shaktipuja’ by Vyomesh Shukla who came from India. Besides, the poetry reading session with famous poet Vasant Chaudhary was also very interesting. At the end of the festival, Ranjana Niraula, Director of Kalinga Literature Festival, Kathmandu, expressed her heartfelt thanks on behalf of the organizers. Promising to continue this festival, Niraula expressed her happiness that this first international edition of the Kaling Literature Festival was completed with grandeur and informed that the Kaling Literature Festival will be held in Nepal on September 1, 2 and 3, 2023 next year. Some 350 literatures and art lovers from Nepal and India were present in 40 sessions of the festival that ended today.
Ranjana Niraula director of KLF Kathmandu said, “The first edition of the Kalinga Literature Festival Kathamndu was a huge success. Many speakers, storywriters, performers and poets from Nepal had a chance to showcase their talent before an enthusiastic audience.”
Share