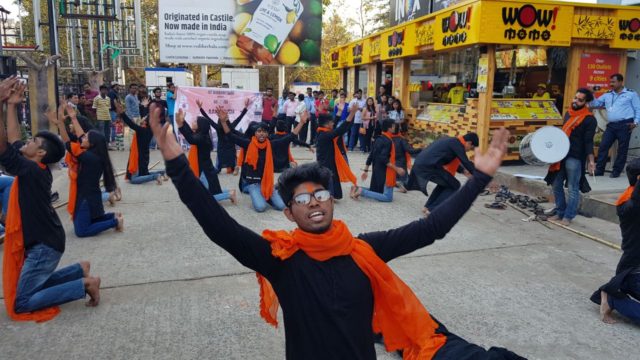 Bhubaneswar, 04/02/2018: On the occasion of World Cancer Day 2018, 20 students from ‘Aakanksh’ -the drama club of IIIT Bhubaneswar staged a Nukkad Natak at the BMC Bhawani Mall in the city in collaboration with Bhubaneswar Municipal Corporation and Bhubaneswar Urban Knowledge Centre (BUKC) of BDA.

Going with the theme of World Cancer Day this year ‘We Can, I Can’ the students made announcements and raised various slogans during the performance propagating awareness messages on prevention, detection and treatment of cancer. Apart from spreading awareness on prevention of the deadly disease and the danger of tobacco which is one of the major causes of it, the Nukkad Natak attempted at creating awareness on the plight of elderly parents in the city who are often at the receiving end due to negligence of children.

One part of the Nukkad drama was based on the story of an ungrateful son who didn’t care towards his elderly parents, especially a cancer ridden father, who had done everything to make him a successful person. Through this we tried to depict the modern day attitude of certain people towards their elderly parents who are instrumental in making them what they are, said Abhikrit Rajput, a student and member of Film and Theatre Society of IIIT Bhubaneswar. Among other students Sristy Tripathy, Suranjeeta Sengupta, Neha Sharma, Nayonika Mahapatra, Pushpak Hota and Sambit Sourav led the show at the nukkad natak performance amidst a cheering Sunday crowd at the mall premises.

It may be noted that, as part of citizen led outreach initiatives Bhubaneswar Urban Knowledge Centre (BUKC) of BDA with support from Bhubaneswar Municipal Corporation has been organizing several awareness campaigns in collaboration with students groups from leading educational institutions and volunteer groups. Recently medicos from AIIMS Bhubaneswar staged a flash mob performance on ‘Road Safety’ in collaboration with the city authorities.