Bhubaneshwar: Following the launch of the inaugural edition of .FEST (Bhubaneshwar City Festival) on 1st December, the festival has experienced a surge in attendees given its unique experiences and performances with over 15000 visitors today. On Day 4, the festival ensured that audiences were left spell-bound after traditional dance performances from four states of India – Assam, Punjab, Manipur and Jammu & Kashmir, as well as the soulful opening performance by singer, Sohini Mishra who opened the entertainment for the evening.

The joyful dance form, Bihu depicted the culture of Assam with energetic dance steps and hand movements. The Bihu performers were adorned in traditional Assamese attire and showcased the best of their talent with synchronized choreography. The Bhangra dance performers symbolized the joyous celebrations of Punjab with a spirited performance that had the audiences shake a leg to the beats of the Dhol.

Known as ‘The art of the sword and the spear’, the martial dance form with fire – Thang Ta from Manipur left audiences amazed as the trained artists performed with various weapons and fire that were coordinated with the rhythms of breathing. Jammu & Kashmir’s folk dance, Rouf enthralled the audiences as the artists performed the dance with elegant footwork and colourful costumes.

The individual dance performances was followed by a spectacular finale where all the artists, close to 80 in number, from all the four states came together on the stage, to showcase the unity of our tradition and culture. 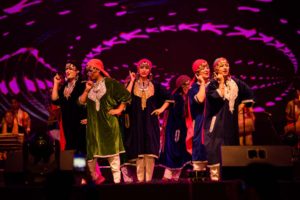 As .FEST presented a glimpse of the dance traditions from the four states today, the International Street Food Festival continues to offer a gastronomical experience for food lovers. Showcasing delicacies from over 16 countries, different states of India and specialties of Odisha, the festival’s food extravaganza is a popular hit with audiences.

On Wednesday, 05 December, 2018 audiences will get the opportunity to watch renowned Odissi dancer, Aruna Mohanty perform live at .FEST. Locals and tourists can brace themselves for what promises to be a sensational show titled “ SaptaVerna“ that will not only include a solo performance by the artist, but also a choreographed group performance of 80 dancers directed by the dance maestro herself! The show is poised to be unforgettable.