Located beside the west banks of Bindu Sagar Lake, Ekamravan Medicinal Garden is one of the special attraction points of Bhubaneswar. Lingaraj Temple, the prime shine spot of the city is located next to it. Thetire space of the garden is shrouded with more than 200 varieties of medicinal plants and trees. Interestingly, the area where this garden is blooming, was an abandoned land few years ago which was used as a toilet, until 2007 onwards, the state government decided to transform this place into a medicinal garden.
However, despite of being one of a kind places in the temple city, unfortunately it has remained underrated in public approach.
Ekamravan has been named with a spiritual significance. It is said that Ekamrakshetra or Bhubaneswar is one of the favourite places of Lord Shiva. And here he liked to meditate under a huge mango tree. The term has been derived from there as “Ekamravan” or “One Mango Tree Forest”. 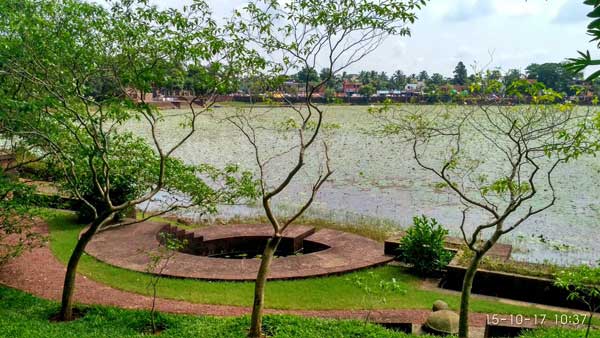 The medicinal plants and herbs of Ekamravan carry the significance of having both traditional and scientific association with Hindu deities. The garden is not just only about greenery, but it also gives glimpses about heritage of Odisha. Beautiful carvings and craftings have been done by artists of Raghurajpur, the historical village of crafts and Lalitgiri, the Buddhist heritage site.
The serene and tranquil ambience of Ekamravan engulfs visitors to regain peace and energy. While leisurely roaming around the garden one could additionally acquire knowledge about medicinal plants and benefits.
The structure of this garden has been creatively implemented in a manner that ensures it’s continuity with the heritage value of the state. There are three sub precincts designed here- The Shiva Pindi, The Parvati Pindi, The Ganesha Pindi where the plants have been categorically placed. Visitors buy plants and herbs from its nursery which is made to promote their usefulness.
Ekamravan is managed by an autonomous body called ‘Ekamravan Medicinal Plant Garden Society’ promoted by the Forest and Environment Department of Govt of Odisha.

Centre’s reforms result in consistent increase of FDI inflow; FDI grows from US $…