The theme for the Communiqué was “Needs vs. Want: A Media Dilemma”. The event started with the inaugural address of Prof. Fr. S Antony Raj S.J, Registrar, XIM University, Odisha. He talked about people’s perennial dilemma of wants and needs. He spilled his thoughts on how people are both the consumers and producers of content. He also shed light on the ever-abiding presence of media and how it influences our lives.
The Panel discussion was moderated by Prof. Arpita Saha, Assistant Professor of School of Communications, XIM University (New Campus), Odisha.


The eminent speakers of the conclave were –


Mr. Gurbir Singh, Consulting Editor, New Indian Express. Mr. Gurbir Singh commenced the discussion about the various media formats available to the audience to combat the dilemma of the needs and wants of their media diet. He emphasized how the trend has shifted from print and television to digital media platforms as the generations move forward. He elaborated on the digital media platforms and talked about the minimal entry barriers and the wide variety of choices it offers to the media consumer.Mr. Singh threw light on how the trends have been different for India over the past years compared to other western nations of the world. He also shared his insights on the challenges that media platforms have been facing for decades and are also an issue in the modern era.

Mr. Nikhil Chandwani, Co-founder – NYK DAILY. He started his deliberation by talking about demystifying news headlines and crafted, emphasizing sentimentality.He spoke about how clickbait news headlines are misleading people and a need for the news headline to correspond with the content. He highlighted that the global use of digital platforms such as Twitter, Instagram, Facebook, and Google search makes journalist content hyper-visible. This Omni-presence of content has terrible repercussions as it can breed fake news that can turn out to be real. He also spoke on how journalism should focus on digging hidden history; this can be done by providing a comfort zone to the eyewitness. According to him, high-quality journalism is possible through presentation, trustworthiness, diversity, and depth of information.

Ms. Arushi Sana, Founder – NYK DAILY. She addressed the topic by citing the Vedic literature, the concept of Dharma revolving around the principles of Artha, the material and social needs, and the Kama, wants and desires. She emphasized how Dharma is an important aspect of journalism, which is about the righteous conduct and duty towards community, essential for the sustenance and welfare of the individual, society, and creation. She also spoke on how news is being consumed as people have shifted from the “Chai-Akbaar Phenomenon” to short-form news formats; At the same time, digitalization is the need of the hour, it is also scary because today it has the power to topple and make governments across the world. They do influence elections to a large extent. Moreover, she said, “Often media one consumes out of desire turns into a need when it is forced by habit”, as it is difficult to distinguish between needs and wants when habits come into the picture. She shared her previous experience as a newsreader centred around celebrity apparel and similar things. In contrast, critical global aspects such as climate and geo-politics are hardly touched upon by news platforms. She emphasized that effective news content will increase when people are interested in such elements. Moreover, she talked about how media houses were in a tough spot where they had to broadcast light celebrity content during COVID-19 when every news channel telecasted the daily death toll. 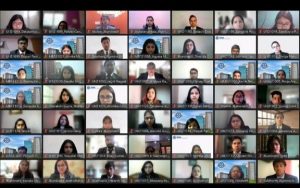 Mr. B.V. Rao, Group Editor – TV9 Network. Mr. BV Rao started his speech by quoting his first editor – “our job is to tell the reader what they need but not what they want”. He was deeply inspired by this quote and follows it in his life. He discussed social media as a source of information that can sometimes transfer misleading information. He believes the traditional press digs deep to find answers and portrays essential journalism skills. It is crucial to be fair while publishing any information. He extended his discussion by talking about artificial intelligence and how it is good to calculate and know the metrics, but the autonomy of decision-making is eventually being taken away from the editors.

Post the panel discussion, the platform for a Q&A session was opened by the moderator.
An article writing competition – Critiqué was also organized as part of the conclave on Dare2Compete, where students from across colleges participated. The results of the competition were declared as part of the closing proceedings of Communiqué.

The conclave concluded with a vote of thanks by Utkarsh Srivastava, Coordinator, IlluminatiX, XIM University (New Campus). He extended his gratitude to the Vice-Chancellor, Registrar, speakers, media partners, moderator, and everyone who contributed to the event’s smooth functioning and flawless execution.