Bouncing back to life – Prabhasini Pradhan

She looked like an ordinary woman in the city of Bhubaneswar but her courage, her dedication and service towards the people of HIV positive makes her extra ordinary. She is 45 years Old Prabhasini Pradhan, President of Kalinga Network of People Living with HIV/AIDS (KNP)+. Prabhasini herself is an HIV positive .The in India’s eastern state of Odisha provides strong social backing, heartfelt concern as well as assistance in the form of legal services or vocational trainings to people living with HIV/AIDS. They are the true life-savers for many in the region.

Prabhasini Pradhan, the president of the KNP+ has been to hell and back. She can never forget the fateful day on which her husband of three years, who was working in a factory in Mumbai, was tested HIV positive.

“It was March 14, 2003. I was really taken aback with the results of his report. And then came the second blow – two days later, my test report too confirmed my positive status,” she recalls.

Fifteen days later, her husband died suddenly, leaving her solely responsible for their one-year-old baby girl. That was the beginning of one of the toughest phases of her life.

“After my husband’s death, I went to my in-laws’ home in Tarimi village that falls under Chilika block of Khurda district. I was not allowed to participate in any of the rituals associated with his last rites. Everyone thought they would catch the disease from me so nobody talked to me. All my belongings were thrown out of the house. They behaved as if I was an untouchable. Moreover, they didn’t even accept their granddaughter although she had tested negative,” elaborates Pradhan.

This was over a decade back, a time when awareness about HIV/AIDS was largely confined to the urban educated. In the rural heartlands, stigma and rumors ensured that HIV positive people were disgraced and driven out of their homes and communities. As expected, Pradhan’s in-laws told her to leave their home forcing her to go back to her natal village. There she tried to find work to make ends meet and ensure a decent childhood for her daughter. 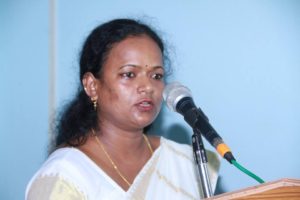 Although Pradhan’s test report was positive, she couldn’t come to terms with the misfortune that had befallen her because of it. So, in 2004, she travelled all the way to Bhubaneswar to get another test done.

In between she met I met a counselor at an Integrated Counseling and Testing Centre (ICTC) and she helped her deal with the trauma she was going through. She told her that there are hundreds of people living with this virus and invited her to come for a meeting of OSACS (Orissa State AIDS Control Society). There she met Amarendra Behera and Ajay Samal, whose life story inspired her and then with the help of these two people she decided to start a forum People Living with HIV/AIDS (KNP+) to help the people with HIV positive.

HIV people live in shame, depression and do not speak up for their rights; People Living with HIV/AIDS (KNP+) gives them the confidence to do so.

“I have seen widowed positive women being denied their share in the husband’s property. We rally around them, helping them to get their rightful share. There are also complaints of doctors, nurses and health workers not attending on positive patients. With our efforts this problem has been solved.” she said.

It’s also a strong social backing, heartfelt concern as well as assistance in the form of legal services or vocational trainings offered by their support group that are the true life-savers for people living with HIV/AIDS.

This Kalinga Network of People Living with HIV/AIDS (KNP+) in India’s eastern state of Odisha stand different because it is set up by one infected woman Prabhasini, who hit rock bottom but eventually decided to fight back, this group, with centers across various districts like Sambalpur, Bargarh, Angul, Bhadrak, Puri, Koraput, Nayagarh and Kendrapara, supporting more than 5000 people with HIV positive and is making a huge difference in the lives of HIV positive people and their families.