Bhubaneswar: Whenever there is an adventure event in BCAC, it ought to be full of fun, enjoyment and limitless entertainment along with the obvious adventure.

This Sunday, we have planned to offer another taste to the cycling enthusiasts in terms of hiking in the famous Barunei Hills. As we have come here earlier by cycling often, we are familiar with the famous caves and water spots along with the trails on this hill. The trails of Barunei hill are also quite famous for its wild-flowers which adorn the hill-trails during different time of the year.

With a view of providing a hiking experience to the cyclists of Bhubaneswar and beyond, we have programmed a *Bike and Hike* adventure to Barunei. As we announced the event on our Facebook page, more than 50 cyclists shown their interest to join this event. The event and it’s description became so popular that, cyclists and adventure enthusiasts from other states and districts flew-in to join this adventure.

On the D-Day, we had an assembly of more than 60 participants. Most of them are cycling with us from our Club House to Barunei. There were some other participants (mostly family members of cyclists), who joined us at the base of the hill for hiking. As planned, the peleton of cyclists started their ride towards Barunei at 6:45AM. On the way, some other cyclists joined the peleton at Khandagiri. With an overcast sky in a wintery morning, the weather was quite pleasant for a ride. The peleton with Neon-Green jerseys was looking like a wave of green on the black-top tarmac. The ride was fun with lots of chit-chatting and light-jokes. By 8:15AM all cyclists reached the base of Barunei hill.

We have planned for sumptous breakfast for all the hikers at the base-station. The cyclists and their family members filled their hunger with nicely prepared breakfast by the famous “Barunei Hotel”. As soon as we finished the breakfast, the hikers were filled with ORS, Oranges, Toffees and Banana with drinking water. Soon after we started hiking the hill-top, by the side of the all-season stream and Barunei temple.

To our surprise, the newly constructed concrete path was made at an incline of more than 30 degrees. It was a tough challenge for the hikers to walk over such a high inclined path on foot. The hikers were literally walking with a huge angle to keep their body steady on the hill. After climbing almost 400mtrs, the concrete road ended and we ventured into grass-lands with huge bushes and shrinking trails. The road was full of different wild-flowers and huge spiders. Some were quite frightened to see these huge wild-spiders which were abundant on this hill. But, they are neither venomous or harmful, and trekking/hiking with them is quite safe. 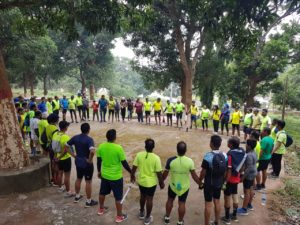 It was strikingly magnificent when we approach the top of the hill with a view of Bhubaneswar and Khurda from the hill-top. We reached Sita-Kund (a natural water resorvoir) and took some rest over the stones. We also explored the cave of Barunei hill, which was said to be over a thousand years. We couldn’t find the Baba (the Godman, who was living in the cave), but we explored his daily-used artifacts and idol of Shiva, Jagannath, Maa Durga and Shri Krishna inside the cave. We spent quite some time to capture the beauty of the nature through our camera lenses. By 11:30AM we started returning back to the base through the non-existent paths on the Barunei hill. After reaching the base, some of us took a dip in the stream water to cool their souls. Others enjoyed the Memento Distribution Ceremony. We have prepared a badge as a token of memento for this amazing adventure, which we distributed to each of the participants, individually.

After a brief refreshment, we headed back to Bhubaneswar on our bicycles riding with huge load of memories and snapshots in our mobiles.