Bhubaneswar: The Bhubaneswar Development Authority (BDA) under its innovative community engagement and place-making project, named Bhubaneswar Public Spaces (BPS), involved 100 architecture students from different institutions in and around the city to design 30 public spaces across the Temple City.
The project included spaces such as under flyover space, plazas at major junctions, underutilized spaces along roads, entry plazas to the public buildings such as State Museums, etc. These spaces typically lacked pedestrian safety, cleanliness and were mostly encroached by unauthorised street vendors, in addition to basic sanitation and cleanliness issues. The objective of this project was to work with the locals who use the space on day-to-day basis such as residents, authorized vendors and city authorities who maintain the space such as Traffic Police and Bhubaneswar Municipal Corporation (BMC).
Extremely challenging, the designing of these spaces primarily focused on reclaiming the space from the vehicles, heaps of garbage, unorganized street-vendors and make the space available for the citizens in form of a free, easy accessible and safe, well-lit public space. Few of the projects also focused on improving the geometric designs of the junctions. The BDA urban planners also assisted in the implementation undertaken by BMC and other city agencies.
For example, the BDA Frontage project under BPS used underutilized space, predominantly used for two-wheeler parking and after the intervention, the space is transformed into clean, well-lit and landscaped public space, with clear segregation between two-wheeler parking and pedestrians with built-in seating.
Similarly, the “I Love Bhubaneswar’’ plaza was just a pause space for the passersby, lack of pedestrian safety, unauthorized street vendors, illegal hoardings creating a visual clutter, no sense of welcome as visitors arrive from the Bhubaneswar Railway station but after the BPS intervention it has become a sought after space for the passersby, well defined plaza with sense of identity due to the sculpture and a “selfie point’’ for the youth.
The State Museum front area, one of the busiest junctions of the city leading to the Old Town on the one side and Puri on the other side, was taken up with a motive to make the space usable for the public by making an arranged parking, seating for people waiting for busses to Puri/Konark and visitors coming to the museum. It has also created a safe and defined space for pedestrians.
The major BPS projects of BDA are located at: Kalpana Square- In front of Odisha State Museum and Roundabout , AG Square- Near proposed Museum of Urban History, Forest Park- Airport Square to Capital Hospital Square, Old Town Area- Debipadahara Tank with Park, Old Town Area, Taleshwar Square Entry to Old town Area, Mausima Square Area near food stalls along flyover and in front of flyover, Power House Square Near Nirman Soudha, 120 Battalion Square- Near MLA colony and Adjacent to Commissionerate Police Headquarters, Unit IX Food Street near St. Joseph High School, Puri Cuttack Road- Area under Maharishi College Flyover, Shaheed Nagar Area along NH opposite to Aayakar Bhavan, Vani Vihar Square area under flyover, Vani Vihar in front of Rama Devi College, Stadium Square to the World front, Kalinga Stadium Area and Commercial Area in front of Gate No. 2, Jaydev Vihar Square, Area under flyover and Acharya Vihar- Area under flyover and near Planetarium and Acharya Vihar- Area in front of Science Park, Master Canteen, Kedargouri Plaza and BDA Frontage. 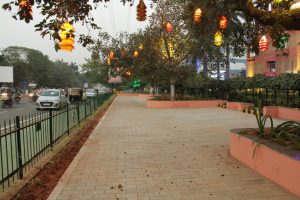