Bhubaneswar : Bhubaneshwar became Asia’s first capital city to assimilate some of the world’s best-known sportspersons at the EKAMRA SPORTS LITERARY FESTIVAL, as Asia’s largest and most prestigious Sports Literature Festival kick started with a bang at Mayfair Convention. On the opening day of the festival, the Chief Minister of Odisha, Naveen Patnaik in his inaugural address, said, “I am delighted to be here today. Eminent sports personalities have created so much euphoria here in this city. Soon, we are hosting the World Cup Hockey in Odisha at a place, which has been the cradle of hockey, is an honor. I am sure we are going to put up a spectacular show for visitors to take back with them some alluring moments from this festival.” 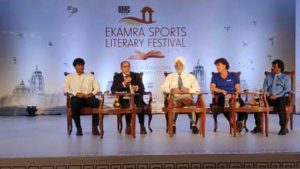 The other star at the inauguration was triple Olympic Gold medalist swimmer, Australia’s Stephenie Rice, who stole the show with her natural charm and elegance. The morning session also had a number of prominent personalities of Odisha taking part in a discussion about the grand sporting events that Odisha has been hosting. Shri Chandra Sarathi Behera, Minister, Odisha Sports & Youth Services in his chat with Ms. Shireen Sethi of NNIS, expressed how such a festival marks a new chapter in the history of Odisha, and how this is just the beginning of some even greater events to take place in future.
Another session with former Australian cricketer, Jeff Thomson with Nikhil Naz of NDTV turned out to be one of nostalgia, rich trivia and loads of fun. Ekamra Sports Literature Festival presents an enriching and entertaining lineup of sessions with star sportspersons like Ben Johnson, Ajinkya Rahane, Aakash Chopra, Rick Charls worth, Dhanraj Pillay, Dilip Tikray, that explore various nuances related to different sports and the journey and struggles of sportspersons life. 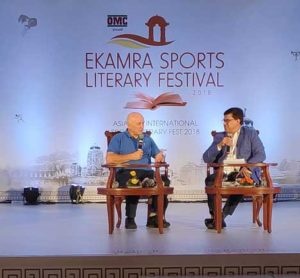 An initiative of Emerging Sports and the Department of Sports & Youth Services, Govt of Odisha, this high-powered conclave will include some of the biggest sports stars including athletes, players, and coaches, national and international sportswriters. The organizers would welcome sports fans from across the world to listen to over 30 top-notch celebrity speakers.
Undoubtedly, India has never witnessed an event of this magnitude, which would not only create headlines but also pave the way for a new sporting philosophy and sports strategy to emerge.
During the two-day conclave, numerous national and international sportswriters, state government, authors, players and coaches will also be available for interaction.