Diwali, one of the most significant festivals in India is celebrated across the length and breadth of the country with much fanfare and enthusiasm- by almost all religious faiths- Hindu, Buddhist, Jains, Sikhs. Known as the “Festival of Lights”, Diwali is a 5-day celebration, wherein friends and families get together, light ‘Diyas’ or earthen lamps in their houses, feast on sweet delicacies, exchange gifts, play games and burn crackers.

It is believed that Rama with his brother laxman, wife Sita, follower Hanuman and the army of the monkeys  returned to Ayodhya after vanquishing Ravana on this day and the entire Ayodhya was lit up to welcome them.

It is also believed that Krishna killed Narakasur, a ferocious demon on the eve of this day and his victory was celebrated on Diwali day.

Some also believe that Goddess Lakshmi pays a visit to the houses of devotees in the middle of the dark night, and blesses them with wealth and happiness.

In Jain tradition, Diwali is celebrated in observance of “Mahavira Nirvana Divas”, the physical death and nirvana of Mahavira. The Jain Diwali celebrated in many parts of India has similar practices to the Hindu Diwali, such as the lighting of lamps and the offering of prayers to Lakshmi. However, the focus of the Jain Diwali remains the dedication to Mahavira.

The festival of Diwali has significance for Sikh faith too. According to Ray Colledge, highlights three events in Sikh history: the founding of the city of Amritsar in 1577, the release of Guru Hargobind from the Mughal prison, and the day of Bhai Mani Singh’s martyrdom in 1738

Diwali or Deepavali is called the festival of lights because it symbolizes the victory of light over darkness, good over evil and hope over despair.

As the country is celebrating the festival of lights, here is wishing all a happy Diwali with a Madhubani style painting. 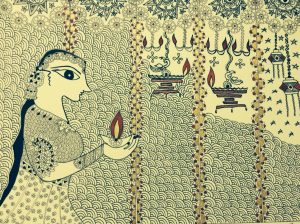 Madhubani art is practiced in the Mithila region of Bihar and Nepal. Often characterized by complex geometrical patterns, these paintings are known for representing ritual content for particular occasions, including festivals, religious rituals, etc.

Bihar government is trying to promote this art form as part of the culture of Bihar. It was a delight to see the walls of many public buildings bearing madhubani painting. The road leading to the airport has many such paintings. It really looked good and cheerful-something that people rarely associate with Bihar.

More than half of the languages, which could be about 400 spoken by India’s 1.3 billion people may die out over the next 50 years warned The People’s Linguistic Survey of India (PSLI) recently. In last five decades, India had already lost 250 languages. Each time a language is lost, the corresponding culture is killed. Most at risk are marginal tribal communities whose children receive no education or, if they do go to school, are taught in one of India’s 22 officially recognized languages. Therefore, every attempt should be made to preserve the language. That, precisely is the motto behind observing 2019 as  the year of indigenous languages.

When it comes to cashless transaction China is miles ahead of us. I am told even the donation boxes in the ancient temples of China have a QR code for people to pay – cashless! And the money instantly reaches the account of the temple. 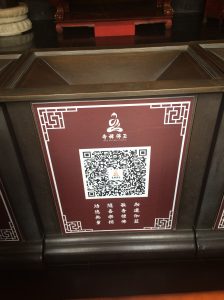 Temples in India should also follow suit. They should also have facilities of paying through mobile banking by scanning QR code. It will preempt pilferage and ensure transparency.
This will also minimize the hassle of counting the money, accounting it and depositing in the bank. All big temples, churches and mosques- wherever there is a provision of accepting public donation in India should plan to have the system in place. If small shops and roadside eateries can have it, so can the religious institutions.

Tailpiece: How to identify different places of India

Scenario 1: Two guys are fighting. Third guy comes along, sees them and walks on.. That’s MUMBAI.

Scenario 2: Two guys are fighting. Third guy comes along and tries to make peace.. The first two get together and beat him up. That’s DELHI.

Scenario 3: Two guys fighting and third guy comes from a nearby house and says “don’t fight in front of my place, go somewhere else.” That’s PUNE.

Scenario 4: Two guys are fighting. A crowd gathers to watch. A guy comes along and quietly opens a tea stall there. That’s AHEMDABAD.

Scenario 5: Two guys are fighting. A crowd gathers to watch. In ten minutes the crowd takes either sides and indulges in slanging match for hours even as the guys fighting leave the place. That’s West Bengal.

Scenario 7: Two guys fighting. Third guy comes and shoots both of them. You are in Bihar.

Last Scenario: Two guys fighting, third guy comes along with a carton of beer. All sit together drink beer and go home as friends. You are definitely in GOA.