Bhubaneswar: World’s biggest festival celebrating Mythology, Mysticism, Music, Dance and spiritual literature Mystic Kalinga Festival kicked off here on Saturday amid presence of leading personalities of Indian Literature such as Ashok Vajpeyi, Ramkant Rath and Sitakant Mohapatra and many other literary and cultural enthusiasts of the city.

Vajpeyi is a noted Hindi poet, critic, essayist and translator, and a dynamic presence in the Indian cultural scene. He is the author of thirty-eight books of poetry and criticism in Hindi and the founder/editor of eight journals in Hindi and English. He is the recipient of the Sahitya Akademi Award (1994) for his book Kahin Nahin Vahin, the Agyeya Rashtriya Samman (1997) for his contribution to Hindi literature, the Officer’s Cross of Merit (2004) from the Republic of Poland, and the Officier de L’Ordre des Art et des Lettres (2005) from the Republic of France, among others.

Along with Vajpeyi, noted Odia poet, playwright and poet Harihar Mishra also received Mystic Kalinga Literary Award for his exceptional contribution in creating thought-provoking Odia plays. He had won the Odisha Sahitya Akademi Award way back in 1977 for his play Ratira Duiti Dena. 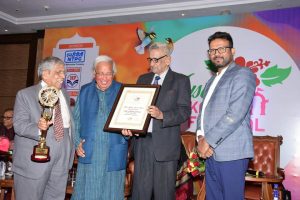 The award has been instituted to recognize and celebrate three prolific writers, poets and performers in Odia, in one Indian language and in one international language. The awardees have been chosen keeping in mind their contribution to their specific language and genre. 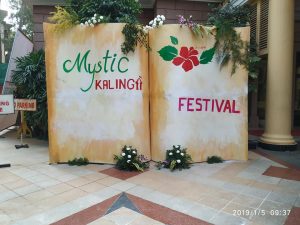 Vajpeyi : Dissent in Bhakti Poetry is a democratic right

Mr.Vajpeyi, a prominent face of Indian literary society in raising voice against Dalit and Communal atrocities in India, delivering his key note address Saturday said dissent in Indian Bhakti poetry allows the devotee to question the God, the Society as well as oneself without undermining the authority of God. The Bhakti poetry poses questions and answers them using different devices of poetry.

The three day literary and poetic extravaganza will be attended by many noteworthy Padmashree awaradees, poets and by mythology expert Devdutt Patnaik.

About Mystic Kalinga Festival  : It should be noted that for the last three years Mystic Kalinga Festival has set a global benchmark in literary festivals. This year more than 100 celebrities from the worlds of literature, music, cinema, dance, theatre will assemble in the temple city of Odisha to deliberate on the theme of “FROM THE CARNAL TO THE COSMIC: A Celebration of Bhakti Poetry”  at the  Mystic Kalinga Festival: A Festival of Verse, Music, Dance and Discussion to be held in Bhubaneswar and Chilka from  January 5th  to 7th 2019.

Mystic Kalinga Festival (MKF) returns to the temple city, smart city, the sports city and the city of culture and spirituality, the capital city of Bhubaneswar. During the three days in the first week of the New Year, the city will witness hundreds of renowned poets and creative artists reciting and performing at the event.  Eminent writers and Odisha’s Living Legends like Shri Sitakant Mahapatra, Shri Ramakanta Rath, Smt. Pratibha Ray et al will join the festival as Guests of Honour and speakers.

Every year the Mystic Kalinga Festival hosts a variety in books, themes, subjects and its dense ideas representing literature. The festival promises to give you a deep idea about literature both in India and the world. Welcome to a festival that unpacks the many nuances of this strange and fascinating condition called bhakti, and to a conclave of extraordinary talents, perspectives and performances. Welcome to Mystic Kalinga 2019.

Note: Mystic Kalinga Literary Award has been instituted to recognize and celebrate three prolific writers, poets and performers in Odia, in one Indian language and in one international language. The awardees have been chosen keeping in mind their contribution to their specific language and genres. The Award will be announced on 3rdJanuary, 2019.

Odisha Diary Foundation (ODF) and Odisha Media info Service (OMIS) Private Ltd is organizing  annual Mystic Kalinga and Kalinga Literary Festival (KLF) every year to celebrate this creative spirit of Bhubaneswar and commemorate the literary diversity it offers, bringing it in conversation with the best minds in the world of literature within and outside of Odisha and India. Academics, authors, political and social activists, law makers, government officials, corporate leaders, students and people from all walks of life immerse in the vibrant atmosphere of the festival and exchange opinions on their favourite authors and works. Mystic Kalinga Festival and KLF has emerged as an Annual Flagship event in the cultural calendar of Odisha and our focus is to rekindle the romance with literature and foster reading and writing habits, especially among the youth. It offers a national platform with a global appeal and bridges the gap between literature in English and other Indian regional languages.

With 1274 Job offers to date, NIT Rourkela broke all past records of placement