Addressing a huge gathering, Gadkari informed that the work of construction of the second Brahamani bridge is all set to start maximum within a fortnight and would be completed in less than two years. “Need of the hour is not just to develop infrastructure but also to complete these project with minimum time,” Gadkari said.

“Earlier practice of delaying the completion of project has become a thing of the past as my ministry has introduced heavy penalty for the delayed period of completion of any work,” Gadkari said. “Therefore, trust me, this bridge is going to be completed latest by another two years,” Gadkari added.

“The bridge over the river Brahamani, instead of being one bridge, it would be two- three lane bridge and therefore after its completion, there would be three bridges at same point,” Gadkari said. 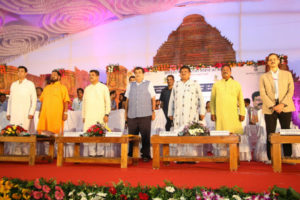 The speed of the development in road construction has also been witnessed in Odisha as well, since there have been many proposals for the construction of new roads here.

“Odisha having about 7,500 km of coastline, it is going to be benefitted strongly from our coastline roads proposal as about Rs 40,000 crore has been sanctioned by the Central Government,” Gadkari said. 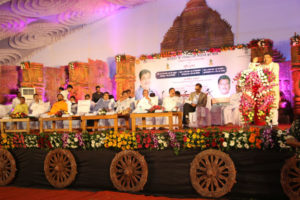 “Besides, from our port-rail link project, the proposed project from Talcher to Paradip would start soon as Rs 4,000 crore has been sanctioned for this project,” Gadkari said, adding that Paradip would be developed as a Smart Port and a Smart City.
Union Petroleum Minister Pradhan said his Ministry would examine the possibility of providing gas lines to the steel city Rourkela. Rourkela MLA Ray thanked Prime Minister Narendra Modi and Gadkari for their support in fulfilling the demand of the people of Rourkela.

Union Minister for Tribal Affairs Jual Oram described it as a major achievement for the public of the district.