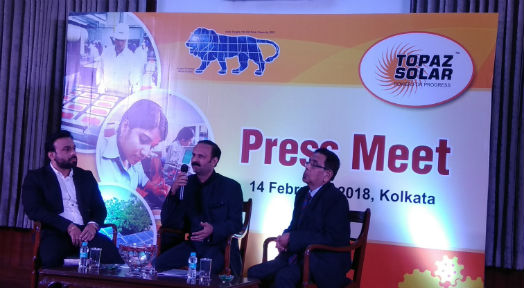 Report by Sanjay D Narwani , Kolkata: Topaz Solar is setting up the first solar module manufacturing plant in Odisha with an annual capacity of 1,200 megawatts (MW) of solar panels in two phases (500MW and 700MW). This was informed by the
Ganesan Natrajan, Chairman at Kolkata addressing the Press on 14th February.

Recently have acquired 70 acers of land at Bandal, Odisha , pin code – 754024, about 50 kms from Bhubaneswar, very near to Cuttack. If required more land can be acquired in future.

The total inlay of this first phase of the 500MW will Rs 238-crore. Of this, Rs 80 crore will be in the form of equity with the rest Rs 160crore debt. Out of the total project cost, Rs 180 crore will be spent on imported equipment.

This project was initially planned to be set up in Info Valley but owing to larger plans it was shifted to another site where the plant would come up on 40 acres in the vicinity of Bhubaneswar.

Topaz is also building an R&D center to have technological up gradation time to time ahead of market mainly into Bi-Facial Cells and Modules in order to enhance the efficiency of the module. Topaz Solar is also planning to have skill development centre next to the solar plant in association with an European firm to have the unskilled local labour trained to be used in our solar module manufacturing plant as skilled labours.

Skill development center will also give training for other forward integration of Solar Power Plant installations, O&M and other related activities.

Topaz Solar is also planning to have the entire power requirements through their own solar power production both through roof top of the plant shed as well as floor mounted structure in the additional land. This will be first of its kind in the world to have a module manufacturing plant with self sufficient power production.

Topaz Solar is acquiring more land for future expansion in the form of Solar Cell Manufacturing Plant as well as Bi-Facial Solar modules with vacuum compression technology with European Partnership. This technology will have EVA and back sheet replaced with glass on both sides and will facilitate usage of Dual face solar cells be utilized in Modules. This kind of modules will have high efficiency in power production and the modules will be exported to both USA and European countries.

Topaz Solar Private Limited is promoted by Sir Ganesan Natarajan and Usha Natarajan. Currently, promoters are one of the leaders in Coal, manufacture of Metallurgical coke with co-generation of power, renewable energy and trading of bulk commodities like Ferrous and Non-ferrous scrap, building material, etc., in India as well as in the International market.

Vedanta doubles its contribution to Rs 201 crores to fight COVID...