New Delhi :On the occasion of the International Day of Yoga, the National Mission for Clean Ganga (NMCG) organized ‘Ghat Par Yog’ on Signature Bridge Ghat in Delhi on River Yamuna, today. This was part of the special initiative of NMCG to have ‘Ghat Par Yog’ on all Ganga ghats.

A group of NGOs, officials from Delhi Jal Board (DJB) and Municipal Corporation of Delhi (MCD), volunteers from Ganga Vichar Manch, students, children and local people participated in large numbers in the event which took place between 6 AM to 8 AM. The Yoga session was conducted by Yogacharya Dr. Dayashankar Vidyalankar, Consulate General of India, New York. Under Namami Gange Programme, Yoga sessions were organized at more than 75 locations in States across Ganga Basin today. The activities were dedicated to Azadi Ka Amrit Mahotsav, to celebrate the 75 years of Indian Independence. Yoga experts, Ganga Praharis, Ganga Mitras, Ganga Doots from Nehru Yuva Kendra Sangathan (NYKS), students, officials from district administration, local people etc. took part in the Yoga sessions organized on the banks of River Ganga and its tributaries. The events were organized through District Ganga Committees, the district-level arm of NMCG, who have been active from the past few months in organizing Ganga-specific activities in the Ganga basin. 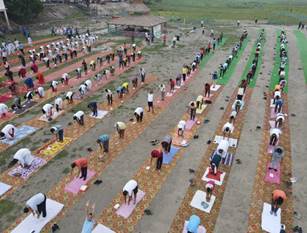 Speaking on the occasion, Shri G. Asok Kumar, DG, NMCG said that ‘Ghat Par Yog’ is the Namami Gange initiative to mark the occasion and several activities are simultaneously taking place at various locations on the banks of River Ganga and its tributaries. This is in line with the Arth Ganga concept given by the Prime Minister in the National Ganga Council meeting in Kanpur. Arth Ganga is to establish the river-people connect through the bridge of economics to ensure sustainability of the projects taken up by Namami Gange. 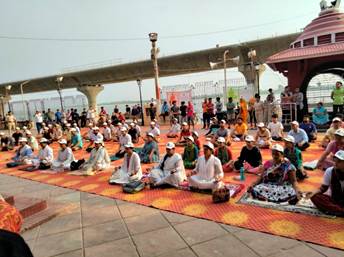 He said that cleaning of tributaries of River Ganga, especially, Yamuna, is one of the focus areas of Namami Gange Programme and informed that a 318 MLD STP at Coronation Pillar has already been commissioned recently whereas 3 other main STPs on Yamuna funded by NMCG are targeted to be completed by December 2022, which include Rithala, Kondli and Okhla. “After the completion of these projects, there be a considerable improvement in the quality of water of River Yamuna as 1385 MLD of wastewater will stop flowing into River,” he said. He motivated the participants to become part of this Clean Yamuna campaign that is gaining momentum. Cleanliness drive on River Yamuna in Delhi is a regular activity organized on the 4th Saturday of every month by NMCG. 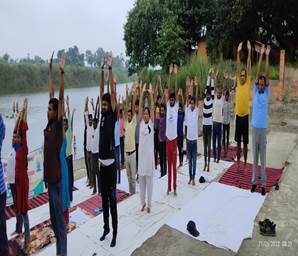