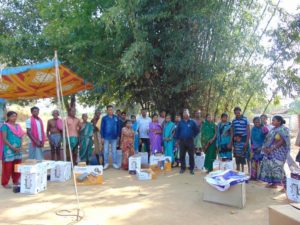 Bhubaneswar: As part of its CSR initiative Aditya Aluminium aims to facilitate uninterrupted, sustainable and low-cost solar fuelled electric power to four villages of Sambalpur district in collaboration with the State Government.

Aditya Aluminium has installed Solar-powered streetlights in 4 villages, which include Bhursipali, Bhalupatra, Tileimal and Pitapali. This electrification work has benefitted 550 people from across 137 families. The company has put in place 28 streetlights, powered by a 75 Watt panel that is supported by 75 AH battery and illuminated by 11Q CFL bulbs. The panels once fully charged can run for 11 hours.

According to COO, Mr. Bibhu Prasad Mishra, Aditya Aluminium chose these villages for the project as they have 300 sunny days, of this five hours are average ‘peak sunshine period’, so adapting to solar power was an ideal alternative. A 10 Watt panel can generate approximately 50 units of energy per day, all through the year. Going Aditya Aluminium intends to roll out more development projects of this kind.

“Safe and sustainable electric energy annually has already been distributed for free to these villages. The well-lit streets have meant that the villagers can now move in and around their neighbourhood without fear after dark, their children could to do their studies under the Solar powered streetlights, which are also fitted with mobile phone charging points. Additionally, the youth within the village are also trained to carry out repair and maintenance activity in case of emergencies,” added Mr. Mishra.

Aditya Aluminium’s initiative of promoting sustainable source of energy that is economical and low on maintenance has been welcomed by villagers. The village committee now lights up the streets for a mere Rs 15 a month!