· Provides 10,000 packets of Glucose powder to the District Administration

Bhubaneswar: JSPL Foundation, the CSR arm of leading steel producer Jindal Steel and Power Limited (JSPL), served fresh cooked food to more than 36,000 devotees during the Rath Yatra held at Puri. The free food service was provided during Netrotsav, Sri Gundicha, Sandhya Darshan, Bahuda Yatra (return car festival) and Sunabesha days of the grand festival.
The Foundation also provided 10,000 packets of Glucose powder to the District Administration, on request, for free distribution among the devotees. The glucose powder packets were distributed by the RWSS, Puri on the day of Rath yatra.
The distribution of staple food was started on Netrotsav Evening and continued till late evening of Rath Yatra in the first phase. In the second phase it was started on Sandya Darshan, Bahuda Yatra (return car festival) and Sunabesha (Lord on Gold Attire) days. Devotees were served rice, dalma (medley of lentil and vegetables) and khatta (condiment made from raw mangoes) behind Gundicha Temple of the holy city, in coordination with the district administration. 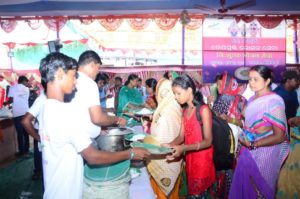 The Glucose Packets were handed over to the Junior Engineer of Rural Water Supply and Sanitation (RWSS), Puri by Mr. Prashant Kumar Hota, General Secretary of JSPL Foundation and Group CSR Head of JSPL. Besides, the devotees, attending the grand festival were also served chilled drinking water from a refrigerated mobile drinking water tanker of the Foundation throughout the 10 Day Festival. For this a customised vehicle of 1000 litres capacity was engaged to dispense refrigerated drinking water. Charged multiple times, the vehicle provides 4000 litres of chilled drinking water every day during the festival.
Responding to the appreciations in social media about distribution of food, drinking water and glucose packets among the devotees, President of JSPL Foundation Smt. Shallu Jindal attributed all such services to the ‘Divine will of Lord Jagannath’.
The Devotees expressed satidfaction over the service by the Foundation. “Food Quality and service arrangement is excellent and much better than any other hotel here. We are very happy with the service”, Bikash Kumar, a devotee from Jharkhand.
Mr Naveen Jindal Chairman, JSPL had tweeted his special greetings for the People of Odisha on the day of Rathyayatra and prayed for Lord Jagannath’s Blessings for the prosperity of Odisha. Mr Jindal also expressed his happiness on the services of dispensation of free food, drinking water and glucose for the Devotees by JSPL Foundation under the guidance of the Foundation’s Chief Smt Shallu Jindal.
Last year also JSPL Foundation provided free food to more than 25000 devotees.

EaseMyTrip Introduces a Special Programme EMTPRO for its Elite Customers

Vedanta Aluminium set to welcome visitors to Make in Odisha 2022