Round Table Discussion on Climate Change & Odisha held at Delhi

New Delhi: The Roundtable on Climate Change & Odisha was held on 26th September, 2017, at India International Center in Delhi. It was the first of its kind, Odisha centric discussion on Climate Change in India and was organised by Odia Samaj, the emerging think tank for Odisha in the national capital region. The roundtable brought together experts & stakeholders from various sectors, including government, policy research organisations like TERI, IIT, OPM, communities of practice and the World Bank, to discuss the role of the all the stakeholders in addressing the sustainable development and climate change agendas, with specific focus on Odisha.

Mr. Charudutta Panigrahi started the meeting with the opening note and he emphasised that “poverty reduction is not a one-way street. Many people exit the cycle or fall back into poverty each year in poorer economies like Odisha. We need good, climate-informed development to reduce the impacts of climate change on the poor in India and specifically Odisha.

President, Odia Samaj, Sri Sidhartha Pradhan presided over the discussions and said that “amongst its several suggestions to better manage climate risks, Odia Samaj would collaborate with the governments, the civil society, the industries and other stakeholders for setting up a climate information management system to help integrate baseline information into policy, planning and investment decisions. 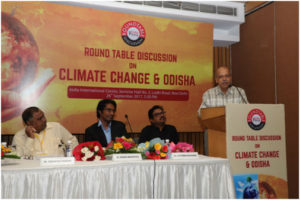 Prof U. C. Mohanty of IIT, Bhubaneswar spoke about an innovative concept and explained the concept of Climate Smart Village model in Odisha which would be an innovation by the state. Similar projects are underway in Haryana and other states, to promote agriculture practices that will mitigate the effects of climate change on agriculture and help communities adapt to climate change to ultimately become resilient to extreme weather events such as droughts, floods, and delayed monsoons. Climate Smart Agriculture involves a portfolio of interventions that are chosen to suit the local environment and the community’s needs. These are adopted at the village level to create Climate Smart Village models. The idea is to start small but upscale the scheme to include several villages in different parts of the country, said Prof Mohanty.

Mr. Barath Mahadevan of TERI spoke about the TERI study on heat islands in Odisha (Jharsuguda and other areas) and shared the data and findings of the study. As a part of the impact, he mentioned that heat trapped by dark-coloured roads and buildings will more than double cities’ costs for tackling global warming this century by driving up energy demand to keep citizens cool and by aggravating pollution. The “urban heat island effect”, under which cities are often several degrees warmer than nearby rural areas, adds to air and water pollution and can make sweltering workers less productive.The focus on global climate change should not make us forget about the local effects,” he said.“Ignoring the urban heat island effect leads to a fairly drastic under-estimate of the total impact of climate change,” he said. Overall, costs for cities/or industrial areas (because the study includes Jharsuguda, Angul and the area till Hirakud which is the coal mines, industrial belt) to limit climate change including the local heat impacts could be higher than without the urban heat island effect, the survey concludes.

He suggested that Odia Samaj should help in developing state-level interaction forums or interdepartmental committees (by suggesting the government) to help integrate climate actions into the state-level programme implementation plans of the various departments. These would also support partnerships with meteorological information and local bodies like municipalities; – Development of data portals, with area-specific climate, environmental, and health information; -Designing Early Warning Systems (EWS) and advisories at the district and ward level; – Demonstration project(s) using weather, climate, and development data for evidence building for localized interventions, research, and analyses.

Mr. Ajit Radhakrishnan from OPM (Oxford Policy Management) spoke about helping mainstream climate change resilience measures within budgetary planning and policy-making in Odisha and adaptation of successful programs in other states of India. He mentioned the need for data systems in climate change in connection with the economy of the state to improve resilience by directly incorporating climate change considerations into policy, planning and investment environments within the state (s). He suggested that Odia Samaj, as the emerging think tank in Delhi could forge a platformto help work with national implementing partners, providing support across the policy cycle from research and capacity building to monitoring and evaluation.

Mr Tapas Paul of the World Bank addressed some theoretical concerns, knowledge transfer, adapting to climate change, implications of changing weather, water and the impact of climate change on agriculture business, social growth, economic empowerment to adapt to climate change and industrial development. He mentioned that policy makers, scientists, communities and civil society will find valuable insights gained by exploring linkages between traditional and scientific knowledge in the state. He remembered the glorious past of Odisha in marine commerce, business and international trade and lamented the fact that Odisha presently is importing fish from other states, whereas at one point in time, Odisha was the leading state in India in marine sustainability and culture. He opined that “people depend on fisheries and aquaculture as a source of protein and income.

It was commonly expressed that the approach needs to be endorsed and practiced in tandem with the government priorities, which indicates the need to: (a) assess climate risks to agriculture and livelihoods in areas facing elevated and increasing exposure to droughts and floods; (b) generate better information on current coping and climate risk management strategies in response to droughts and floods; (c) develop and demonstrate the use of a climate modeling framework that can be used to identify future climate risks; and (d) use the information to assist in developing the key elements of a forward looking adaptation plan that can help improve climate resilience and adaptive capacity.

Mr. Hiranya Mohanty, Trustee, Odia Samaj gave the vote of thanks. The participants and the speakers believed the Round table was one-of-its-kind at the national level, which would help in giving a renewed urgency to the objective of eradicating extreme poverty by 2025 while tackling climate change in Odisha. Development and poverty alleviation would reduce people’s vulnerability to the effects of a changing climate. And ending extreme poverty will be more achievable now—with limited climate change impacts—than later, when impacts are likely to be larger.