Renowned artist Krishn Kanhai of Vrindavan in Uttar Pradesh has prepared the portrait of Vajpayee, who served as Prime Minister three times between 1996 and 2004. 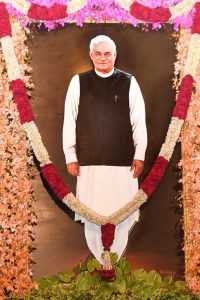 The decision in this regard was taken unanimously on December 18, last year at a meeting of the parliament’s portrait committee chaired by Lok Sabha Speaker Sumitra Mahaja.

Speaking on the ocassion president Ram Nath Kovind said that he was a man of multiple talents and was dear to all .

Vice president M Venkaiah Naidu recounted many laudable achievements of Atal Behari Vajpayee as the PM, particularly his stress on improving connectivity in the country.

Vice President also highlighted the fact that vajapyee commanded respect from all sections of the political divide. 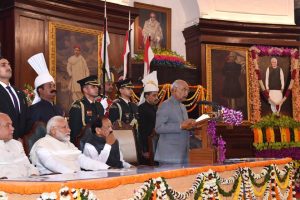 The Prime minister also remembered many qualities of the former PM, especially the ability to communicate his thoughts and feelings even by not speaking even a word.

Speaking about the life and times of Atal Ji, PM Modi said that he was committed to democracy and he lead by example in showing the right conduct by public figures.