Minister Pradhan talked to people and inquired about their problem. He advised local administration to focus on relief to reach the people in marooned areas. Told them to ensure clean drinking water. Minister Pradhan said the area has been affected by flood due to heavy rain in upper catchment of Bramhani river. 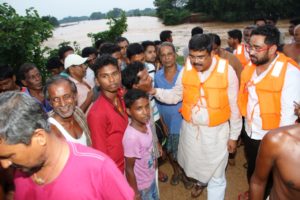