The setting up of a Chair on the Paika Rebellion, in Utkal University, Bhubaneswar, was announced.

Shri Narendra Modi dedicated the IIT Bhubaneswar campus, to the nation. He also inaugurated the new ESIC Hospital at Bhubaneswar. He laid the Foundation Stone for pipeline and road projects.

Speaking on the occasion, the Prime Minister said that the total worth of projects which were either inaugurated, or for which the Foundation Stone was laid today, is over Rs. 14,000 crore. He said the Union Government aims to develop eastern India as the gateway to South-East Asia. 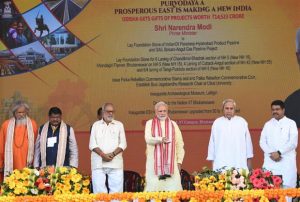 The Prime Minister said that IIT Bhubaneswar would spur the industrial development of Odisha, and work towards technology to improve the lives of the people.

The Prime Minister reiterated the Union Government’s commitment towards the all-round development of Odisha.