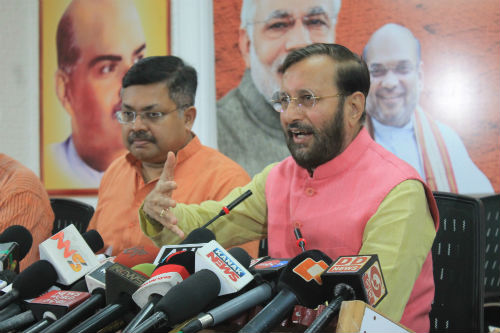 Bhubaneswar: Union Human Resource Development (HRD) Minister Prakash Javadekar has said that the 1817 Paika Bidroha would find a place in history books as the First War of Indian Independence.

“Odisha’s Paika Rebellion will find a place as the First War of Independence in the 2018 history books and include details of the rebellion against the then British rule because the country should learn factual history,” he told a function held here to commemorate 200 years of the rebellion.

He said the Centre has allocated Rs 200 crore for the Paika Bidroha’s commemoration across the country.

Earlier, Chief Minister Naveen Patnaik had urged the Centre to declare the rebellion as the First War of Indian Independence.

He said it involved all sections of people and could not be a mere coincidence that the rebellion measured by its form as well as content provided a marvellous analogy with the subsequent freedom movement across the country and its outcome.

The Paika Rebellion took place four decades prior to the 1857 Sepoy Mutiny. As the British began to tinker with the revenue system at the start of the 17th century, the farming community of Odisha rose in revolt. Buxi Jagabandhu Bidyadhar, military chief of the then King of Khurda, led a motley army of Paikas and forced the British East India Company’s forces to retreat. The rebellion came to be known as the Paika ‘Bidroha’.