Report by Kahnu Nanda; Jagatsinghpur: Nearly 50.000 people depend directly or indirectly on fishing industry and their business in Paradip has suffered due to manifold difficulties and the industry at doldrums as the authorities listen to turtle lobbies ignoring fishermen hassles without considering the grim ground problems, industry sources alleged.
In a recent development, Odisha Marine Fish Producers Association originally known as trawler association Paradip held a press conference at association office, appealed both union and state governments to act on their demands unless they will go to stir, threatened association office bearers.
Briefing media persons association alleged that the fishing ban in coasts to start from November to April each year for turtle conservation has hit the fishing community, especially trawler operators who depend on this trade for their livelihood. The ban on fishing on the coasts has also hit net makers, dry fish merchants, fish traders, basket makers and ice plants operating in Paradip, several times association has represented memorandum to the central empowerment committee on turtle conservation and union forest and environment ministry to give some relaxations to fishing on the coasts during fishing ban, ironically no response has yielded curtailing five months ban period, rued association president Srikant Parida.
The industry shares about 35,000 metric tons fish exports and earns Rs 500 crores foreign exchange each year besides sizable amount of revenue in form of different taxes are paid to both union and state governments every year but authorities have shut their eyes on fishing dependents grievances, association alleged.
To begin with the fishermen’s problem association members lambasted that dredging of river mouth has been long standing demand of fishermen as it has been creating serious hurdles entering and departing fishing harbor in Paradip, several accidents have been occurring claiming fishermen live regularly but the government is deaf ear over the problem, association blamed both Paradip port trust and Odisha government.
The fishing vessels have been victimized by the surveillance authorities as forest, fisheries departments and coast guards men in sense of duty in sea regularly, due to improper maritime water zone identification the fishing boats sometimes are entered no fishing zone knowingly or mistakenly that could attract harassment by surveillance team in form of fine and punishment. 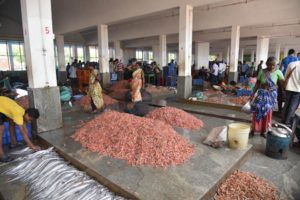 Inclement weather and repeated low pressure have been occurring in coastal districts that leading to incessant rains and rough in sea so fishing dependents have been suffering due to low catch, meanwhile the prices of lubricants, diesel used for trawler have been increased no subsidy has been given from the government.
Fishing business has been recognized by government as industry since decades but no financial benefits, subsidy, loan weaver schemes have been adopted by successive governments to revive the people depend on fishing, informed association vice president Amarjit Jena.

Report said that to ensure turtle conservation the forest and environment department has notified the coast from north of Paradip up to 80 km into the coast as marine sanctuary area and no fishing zone under the Wildlife Act. On the other hand state fisheries department too has prohibited fishing in and around 20 km radial of the Devi river mouth to Paradip coast from November to April each year as consequence the fishing industry has been inactive and trawlers stand idle during five months every year.
The trawler association claims that it is needless to declare 20 km from the shore as a sanctuary zone, the area should be confined to 10 km and trawlers should be allowed for fishing, suggested association secretary Ashok Sahoo.
On the other hand the turtle surveillance squads as forest and fisheries departments claim that the trawlers were not using Turtle Excluder Device [TED] and hence they were forced to take action against errant fishing vessels and admitted trawler association demand dredging river mouth adjacent to Paradip fishing harbor as well as off shore [Ends]