Bhubaneswar; 23 December 2019: Hero Indian Super League (ISL) club Odisha FC is all set to play their home game at the Kalinga Stadium in Bhubaneswar on Friday (December 27) against Jamshedpur FC. The main pitch is fully ready to host competitive matches and after playing nine matches away from Odisha, the Marcos Tebar-led team is eager to perform here.

Head coach @GombauJosep is delighted as @OdishaFC will play the rest of their home matches at #KalingaStadium from 27th December. He wanted to play in front of the home crowd and fans as that encourage the players to give their best.#AmaTeamAmaGame #OdishaForFootball pic.twitter.com/Ki4KfgLR5T

Skipper Tebar has expressed his excitement of playing in Bhubaneswar for the first time in the season and said, “We are really excited to finally play at home and in front of our supporters. It will be great to have fans on our side during our matches here.” 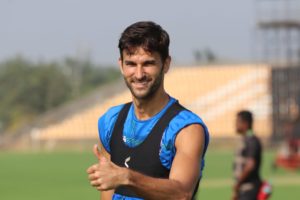 Appealing to the people of Odisha, he added, “We need you to cheer us up. We are looking forward to play at home and you need to be our 12th man pushing us up from the stands. Together we will enjoy the beautiful game.”

Odisha FC owner Mr. Rohan Sharma is also all pumped up ahead of his team’s first game at their own den. Addressing to the sports lovers of the state ahead of the match against neighboring team JFC, Mr. Sharma said, “All the sports fans of Odisha, I would love to have your voices, your spirit, your passion at Kalinga Stadium this week against a very tough team in Jamshedpur FC.

“We have aspirations to be in the top four and your support will help us to push the team forward. We need your help and guidance to make our first game ever at Kalinga Stadium a historic one,” he further added.

.@IndSuperLeague is returning to Bhubaneswar as Odisha's own football club @OdishaFC will play its very first game in the city.