The Aadarsh Mukhyamantri Puraskar singles out the most ground breaking and high impact work done by Chief Ministers in their respective states.

On receiving the award Shri Naveen Patnaik said, “It is a great honour for us to be conferred with this award as it is the voice of the youth of India. Odisha’s transformation is a work-in-progress and I am joined in this mission by the 4.5cr people who make Odisha. We will continue our journey as we continue to grow, together.”

The CM told the assembled young minds that what took him from being a novice at politics to the longest serving Chief Minister is the resolve to bring about a change in the lives of people. He cited both Mahatma Gandhi and Martin Luther King saying that at the core of good governance is, love for people. “If you love your people, you do not see the post you hold as a post, but as a means to serve the people. You do not see power as power, but as a means to transform the lives of people.”

Given an epithet of Mr. Clean for his drive against corruption and performance on the development front, Shri Naveen Patnaik’s govt. during its current tenure has been instrumental in changing the face of Odisha by creating a high impact in all core areas of the state including empowering the poor and women, health, education, industry & entrepreneurship, disaster management, agriculture and sports. More than 8 million people were lifted above the poverty line and the overall poverty decline at 25% is the highest in the country. Farmers saw their income doubled and the state hosted premier sporting tournaments in Asian Athletic Championship and World Hockey League in 2017. Odisha was declared the Champion State in Exports for 2017 with a 114% growth. The state has also has done ground breaking work in reducing the Infant Mortality Rate (IMR). In a recent landmark resolution the state became the first in providing land rights to slum dwellers. 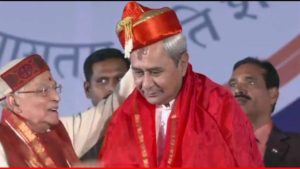 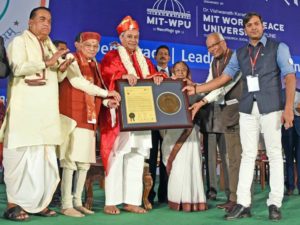 “You cannot lead people unless you love them”

It was an honour and a great pleasure to speak about my experience in politics over the last 20 years to the young minds at the 8th Indian Student Parliament at Pune.

While speaking of the political life, I have tried to show them that it’s a noble profession and advised youth to join politics with a mission to serve people.

Thank you ….Indian Student Parliament and M.I.T, School of Government for this honour.
I dedicate this honour to the four and half crore people of Odisha who have reposed their faith in us for the past 17 years and continuously blessed us.

I’m delighted to be here at the first institution in the country that works towards strengthening democracy. And the wonderful premise on which it strengthens i.e connecting with the youth. With passage of time, everything evolves to its higher form – that is the beauty of the human quest for perfection.

Take any field – Biology, Mathematics, Medicine, Information Technology, we have made giant strides. In fact, the last 200 years have been the most dramatic years in human evolution.

Who would have thought that TWITTER and FACEBOOK will become such integral parts of our lives and social relationships? That, Big Data, Block Chains and Nano-Technology will revolutionise our daily lives like never before.

I understand that you have been listening to eminent speakers over the last few days. Let me tell you, I am not a great speaker. Twenty years ago I was a political novice.I would have never imagined that I will be standing here as one of the longest serving Chief Ministers of the country.

Today, I can say with conviction, that politics is not complicated. Politics is the most powerful instrument to bring about change in the lives of people. And so it follows that if people are kept at the core of your intentions, efforts and initiatives, then there is no complication.

Mahatma Gandhi has summed it beautifully in the Talisman – perhaps one of the greatest political philosophies of all times.
” Whenever you are in doubt, or when the self becomes too much with you, apply the following test. Recall the face of the poorest and the weakest man whom you may have seen, and ask yourself, if the step you contemplate is going to be of any use to him. Will he gain anything by it? Will it restore him to a control over his own life and destiny? ”

In public service, one keeps encountering these situations on a daily basis. Six months ago, we had to take a decision on urban slum dwellers.

There was a choice between, continuing the practice of evictions and treating people as encroachers, resulting in lakhs of families living in fear and insecurity. Or
recognising their immense contributions to the life of the city and providing them land rights.
Keeping people first ………..we chose the second option. A seemingly complicated situation always has a simple solution.
This has been done for the first time in the country and they say it is path-breaking and historic.
When you keep people first –it is good politics,
When you keep people first there is no anti- incumbency 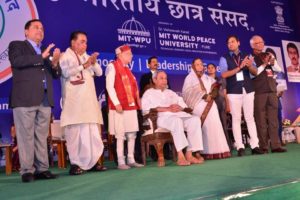 One of the greatest visionary leaders Martin Luther King had said –
“You cannot lead people
Unless you love them”
This to me is the other guiding political philosophy
If you love your people, you do not see the post you hold as a post ,
But as a means to serve the people.
You do not see power as power,
But as a means to transform the lives of people.

All the negative associates of politics – power, wealth and position dissolve into nothingness, if you love the people .
If you work for the love of people, even in the worst of natural disasters you aim for zero casualty…….and you end up setting global benchmarks.

If you love your people you don’t want hungry stomachs staring into the night. And you end up with the highest poverty reduction in the country.

Long after you have breathed your last, you will still continue to live in the hearts of people, like Mahatma Gandhi and Biju Babu.
Today, I am still a novice in politics. I just followed these two principles and the people of Odisha have showered their blessings on me continuously.
As you have shown in that movie – I am single, with a loving family of four and half crore people.
More and more good people like you should join politics. And be, part of the change you want to see.

If you keep people at the forefront,
It is not a Political journey,
It is a spiritual experience.

All the Best. Thank you so much once again.
Bande Utkala Janani
Jay Hind