Bhubaneswar: Chief Minister Naveen Patnaik, at a special function here on Monday, felicitated with cash awards the Indian athletes who won medals at the 22nd Asian Athletics Championships (AAC)-2017 held at the Kalinga Stadium here from July 6 to 9. 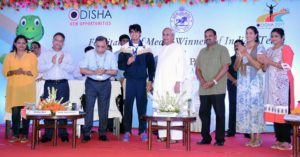 “The performance of the Indian team at the championships has been icing on the cake. All of us are extremely proud and delighted that India not only topped the medal table but also registered its highest medal tally as well as highest haul of gold medals in the 44-year history of Asian Athletics Championships,” the Chief Minister said.
Patnaik also wished the athletes success in their future endeavors. He also extended best wishes for those who will be participating in the World Athletics Championships in August.

Game’s legacy will live on to inspire Generations