Bhubaneswar: Addressing a massive rally of farmers (Chasi Maha Samavesh) in Dhenkanal today Chief Minister Naveen Patnaik initiated the process to transfer livelihood assistance to 1,78,466 number of Landless Agricultural Labourers under Krushak Assistance for Livelihood and Income Augmentation (KALIA) Scheme. Each beneficiary will get Rs 5,000 assistance as the first instalment through direct benefit transfer (DBT).
While speaking at the convention the Chief Minister also handed over offer letters to children of KALIA beneficiaries, who are going to avail KALIA Scholarship for technical/professional education in Government-run institutions across Odisha.
Delivering an igniting speech, the Chief Minister said “your parents are the pride of our nation. With their sweat and blood they feed us all. As our State is prone to natural calamities their golden harvest always face huge loss. Recently, we have started KALIA Scheme for their welfare. It is the best scheme in the country so far to help our farmers and lead a life of dignity. Already more than 30 lakh farmers have received the first instalment of their KALIA assistance through DBT.’’
Saying that a family’s development depends on the empowerment of the children and education always plays a pivotal role in it, the Chief Minister added that KALIA Scholarship had been launched in view of a bright future of the children of KALIA beneficiaries.
He also called upon the children of KALIA beneficiaries to avail the opportunity and apply for KALIA Scholarship, take admission in technical institutions to become doctors, engineers, agriculture scientists, veterinary physicians and other experts. He also wished that the children of KALIA beneficiaries must establish themselves in the society and make their parents and families proud.
“I am always with your families and wish your betterment and empowered future,’’ the Chief Minister added.
It would be pertinent here to mention that with the process of remitting KALIA assistance through DBT total 32,18,504 farmers have so far received the assistance under the Scheme from across the State. 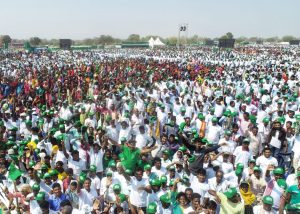 Before the Dhenkanal convention the Chief Minister addressed five massive KALIA Chashi Maha Samavesh across the State in order to reach out to local farmers and spread the message of KALIA Scheme. While on January 25 he addressed a rally of Small and Marginal Farmers in Puri, on January 27 a similar event was held in Ganjam for Sharecroppers, on February 3 in Keonjhar the announcement was made regarding KALIA Scholarship and on February 15 a massive convention was held in Kendrapara for Landless Agricultural Labourers. On February 21 he addressed a huge rally of Small and Marginal farmers in Bargarh.
The State Government had disbursed the first instalment of financial assistance to more than 12.45 lakh Small and Marginal Farmers through DBT following Puri convention and assistance to more than 57,000 sharecroppers at Ganjam convention. While 3.5 lakh Landless Agricultural Labourers were provided the first instalment of KALIA financial assistance through DBT following the Kendrapara convention 14 lakh Small and Marginal Farmers were given the first instalment of KALIA assistance in the second phase under that category at Bargarh.