Bhubaneswar: The 52nd Ekamra Walks, the first guided heritage tour of the city with 30 visitors today including Lt. Colonel AK Gopi, administrative commandant of Bhubaneswar Military Station, his son and friends from the Indian Army.
Three visitors from Europe, one each from Germany, France and Switzerland respectively were part of the tem, who were overwhelmed with the knowledge gathering on heritage and also after seeing the recital of beautiful Odissi dance at Art Vision, the institute established by noted Odissi exponent Ileana Citaristi.
Anna Niesner, a visitor from Germany and native of Munich was a serious traveler, who noted down everything with interests of a school or college-going student, as she loves India very much after her several visits. She also wants to do a research work on the monuments one day. “I will stay here for four days and would also be interested to study linguistics as it is an interesting subject for me,’’ she said. 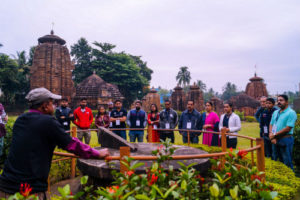 Olive Gerarad, a soap manufacturer from France, who was on a first trip to the city liked all the heritage monuments and enjoyed the walk, said “I feel very bad when there is crowding and the sound levels are high, otherwise the overall experience is fine with me.’’
Stephan Amsell, a native from Swedish Alps and who had come to Odisha on several occasion before, said that while he liked staying in Puri for months together, the heritage walk of Old City in Bhubaneswar was anice experience for him.
A biker, who has several friends also here in India, Stephan said the Odissi recital has really a nice element to the entire heritage walk in the Ekamra Kshetra.
Lt. Colonel AK Gopi’s friend Col Sasi Mohan came with his family to the walk. “With a posting earlier at Gopalpur Army base I had visited several places of Odisha, but the experience of Ekamra Walks was altogether a new learning for me and I am really grateful to one of our colleagues, who had visited the Old Town through this walk before,’’ said Col Sasi, who has come here from God’s own country, Kerala.
Lt. Colonel Gopi also appreciated the walk and urged the youth to explore the rich heritage through it on the weekends.
The Ekamra Walkers today visited Mukteswar, Parasurameswar, Kotitirtheswar, Bindusagar, Doodhwala Dharamsala, Lingaraj, Chitrakarini, Sari Deula, Mohini, Vaitaal temple and the medicinal plant garden Ekamra Van. They also experienced Odissi at Art Vision.
It can be mentioned here that under the Ekamra Walks, a second heritage tour titled “Monks Caves and Kings’’ at Khandagiri-Udayagiri caves and twin hills has started from Saturday last at the historic Jain monument. It will be conducted every Saturday.