New Delhi: On the second day of Odisha Parba 2017, a 3 days mega celebration of Odisha’s Culture, Tradition, Heritage & Cuisine, the major attraction was the work shop by Padma Shri Sudarshan Patnaik which inspired the upcoming talents of National capital to learn about this globally acclaimed art form. In his workshop, Shri Patnaik paid tribute on the eve of Labour Day by hismarvelous sand structures. Another major attraction of the event was “Konark” a contemporary performance by Indian Idol winner Prince Dance Group, Berhampur, which mesmerized the audience.
Hon’ble Union Minister of Housing and Urban Poverty Alleviation and Information and Broadcasting, Govt. of India Shri M. Venkaiah Naidu and Hon’ble Union Minister of Tribal Affairs, Govt. of India Shri Jual Oram graced the 2nd evening of Odisha Parba 2017 as Chief Guest and Guest of Honour respectively.

The event attracted a huge crowd from Delhi and NCR today. The evening was started with enthralling folk dances of Odisha including Ghumura, Jodi Sankha, Sankirtana and Medha Nacha. Musical performance by leading Odia singer Ms Susmita Das was another attraction of the evening. After that, “Taala Badya” presented by Prof Dhaneswar Swain, “Bara Masa Tera Parba” (Chorus) by team Utkalini, “Jaganath Jatra” a festival dance by Pravat Kumar Swain, and musical performance by Ms Kaveri Behera, “Espirangaa” a musical performances by Hrushikesh Acharya with Tariq Ajij, Navya, Sarmistha, Kunu were well appreciated by the audience. “

Yesterday while inaugurating the event, Honb’le Union Minister for Finance, Defence & Corporate Affairs, Govt. of India Shri Arun Jaitley at India Gate Lawns, in the capital city of India in New Delhi said, “I am really delighted to be part of such a magnificent evening and would like to thank Odia Samaj for inviting me. Odisha has been an important contributor in the overall development of the country. People of the Odisha were the first to cross the boundaries taking the tedious sea route to spread Indian culture in the outside world. India is a country of diversity with every state having its own unique culture and identity. Despite coming from different regions, people in our country don’t forget about their own culture and we celebrate all occasions together. This grand event is also providing a platform to non-Odia people to learn about the rich culture and traditions of Odisha. I am hopeful that this event is not become just one time affair and will be held regularly further. 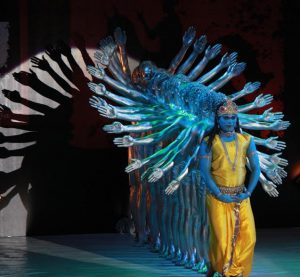 The Guests of Honour Shri Dharmendra Pradhan, Minister of State for Petroleum and Natural Gas (I/C) said, “I am delighted see such a large gathering of visitors in this event. I am thankful to Delhites for showing their love to celebrate occasions across cultures. I am also proud to see such a huge gathering of Odia people here, which shows their bonding with their roots, culture and traditions. This kind of events will further help in propagating the rich heritage of Odisha, the colorful cultural forms and vibrant socio cultural and political ethos of the state.

The replicas of the three colourful chariots of Jagannath Dham at the entrance gate of are welcoming the visitors to the abode of Odia culture. An exclusive stall has been set up for counter selling of the Bhog from Jagannath Temple, Puri. An exhibition titled – ‘Atma Shakti’, the power within propelling the indomitable spirit of Odias, is guiding the visitors through the enchanting history of this ancient civilization. A symbolic replica of the Mountain Caves of Udayagiri has been erected at the site to provide the backdrop for a spectacular multi projector – projection mapping film– a brief light and sound presentation on Odisha and its spell-binding charm. The back drop also provides massive 60 feet stage for the varied cultural programmes and folk dances of the state. ‘Hasta Shilpa Haat’ – the handicraft and handloom section in the festival is selling wide varieties of Odisha’s artifacts, sculptures and famous textiles. The high point of this haat is live demonstration of various art forms like pattachitra paintings, stone crafts, appliqué work, stone work, sambalpuri saree weaving etc. by master craftsmen and weavers. A well-decorated Bhagbat Tungi has also been set up for display. Odisha Parba is having an eatery enclave that serves authentic Odia cuisine consisting of mouth watering snacks, world famous Odia sweets and veg and non-veg thali including a variety of sea food. 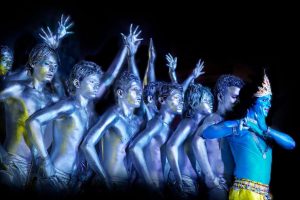