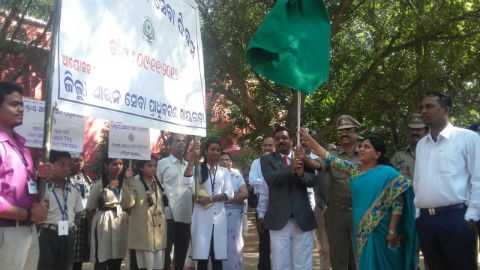 Report by Badal Tah; Rayagada: “During independence struggle in India, the child adolescents had significant role in spreading the patriotism among the toiling mass oppressed by British Rulers and instilling a sense of freedom in them. Similarly now the time has come for the school students to act as army brigade to spread legal awareness among the poor. Under Legal Service Authority Act, especially differently abled, women from all sections, adibasis & dalits, transgenders, senior citizens, persons affected with HIV/AIDS and with natural disasters & human trafficking and languishing in jail custody are rendered free legal aid which is ensured by the state as a matter of right and duty and not charity. This is a constitutional commitment of the state towards its citizens as subjects. The preamble of the Constitution also ensures social, economic and political justice & Right to Life with dignity and Right to Liberty under Article-21. In spite of promulgation of all these Acts and constitutional provisions, poor are far away from justice and entitlement to their legal rights. Contextuallising this, Honourable Justice Sri Krishna Iyer & Honourable Justice Sri P N Bhagabati visuallised several legal apparatuses to actuallise the Legal Service Authority Act. Thus at national level, National Legal Service Authority, at state level State Legal Service Authority and at district level District Level Legal Service Authority(DLSA) came into being. Still the legal entitlements for the poor is a far cry even now; but to make the legal awareness far fledged on a sustained basis, seventeen Students Legal Literacy Clubs have been constituted in different schools of Rayagada. Each club has 25 student members led by teacher, who go to at least hundred families in spreading legal literacy. This legal literacy campaign will go on in Rayagada dist headquarters and block namely Kashipur, Bissam Cuttack, Muniguda, Padmapur, Gunupur. Slowly door to door campaign and awareness rally will be taken up in other blocks and percolate down to GP and village levels”, said Chief Guest Honourable Justice Sri Biswajit Das, District Judge-cum-Chaiman, DLSA, Rayagada after inaugurating the front office of the legal aid clinic established in the court premises.

Smt Guha Punam Tapash Kumar, IAS, Collector, Rayagada joining as Guest of Honour said in her address that the students were the best messengers in spreading the rights of common citizens. “This is a social role as budding change agents to be played by these little angels apart from their regular studies which will help them in their future endeavours”, said Mrs Guha.

The meeting was moderated by Honourable Justice Sri Hrushikesh Sahu, Secretary DLSA. Mr.Sahu emphasized the pro-active roles to be played by the advocates, teachers and students in taking forward this noble initiative so that poor get free and fair justice. “Several IEC materials like pamphlets, posters, banners, placards, handouts and books in local language depicting the legal rights have also been developed to complement the awareness campaign. Through this process, the court is going to the door steps of the poor”, Mr Sahu said.

During a discussion with the local scribes the district judge Mr.Das informed about the system of para-legal volunteers prevalent in the district and their role and establishment of legal aid clinics. A poor person seeking justice and service comes to court and other offices like District Labour Office, District Medical, etc; but gets confused to whom to approach for grievance redressal and accessing required service. This is where a para-legal volunteer intervenes through a legal aid clinic. There are also empanelled advocates to render free legal service to the person in need. There are about seventy such para-legal volunteers placed in the districts through legal aid clinics operational in District Court, District Headquarters Hospital, District Labour Office, several police stations namely in Rayagada, K.Singhpur, Chandili, Kumbhikota, Seskhal, etc. Other legal aid clinics have been established in GP headquarters like Pitamahal, Mukundapur, Chandili, Gadiseskhal, Halwa and Gumma. Rs.9,72,000.00 has been awarded as compensation to victims of rapes, molestation, acid attack and other atrocities.

The meeting was attended by other dignitaries like Honourable Justice Md. M I Nabi, Chief Judicial Magistrate, Sri Patitapaban Choudhury, Sri Y Jagannath Rao, Additional SPs, President and Secretary of Bar Association and eminent advocated apart from several para-legal volunteers. The awareness rally was jointly flagged off by the District Judge Sri Das and Collector Mrs.Guha and additional SP Sri Jagannath Rao. “This is actually a giant leap forward as far as legal awareness coupled with activism. Rayagada will certainly show the way with this kind of concerted effort by judiciary, administration, students, teachers, para-legal volunteers and media persons. I am optimistic of the initiative taken up under the leadership of District Judge Rayagada”, said Sri Tandi, a senior counsel practising in Rayagada court. 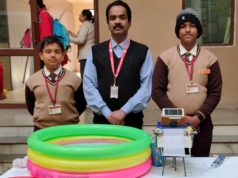 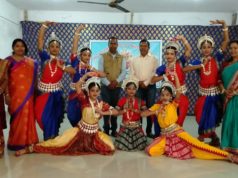