Chinmay Pradhan (Chintu), Odisha’s first International (ATP) rank holder in Tennis, is also an active social worker. He is an inspiration to many, and seen with high expectations by the children of his village. In conversation with Priyanka Joshi, he reveals his love for both and how he manages them in his life.

In brief your journey of achieving the first international rank in Tennis from A message for the younger sports enthusiast Odisha?

I started playing at an age of 10. Though I was not a very athletic kid, yet when I was determined to make a profession out of it and kept on training. I would give credit to Santosh Kumar Malik, my coach since I was 16. He helped me achieve my first ATP ranking and I was the first from Odisha.

Your motivation behind the Chocolate Group, a  social group for children.

When I met Manusmita, my sister from village, for the first time and was mesmerised by her talent. I realised there are many more such talents which require a platform to be showcased. I don’t want these people to move out of the village for it, so I created the Chocolate Group, to get things done for these people.

What place do sports and social work have in your life?

Both are actually interrelated. Sports I play teache me so many things. When I go out for tournaments, I face lots of trouble getting things done. I thought if a person from such an affluent background and good contacts faces such problems, what would be the case with those who are not that privileged. Also, sports help me to have that attitude towards the society. So I try to link both, as  I have also opened Tennis Resort in my village, Mendasar, and creating awareness through tournaments as well. 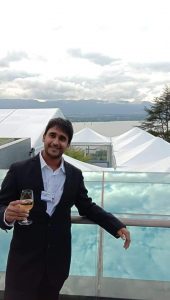 Where do you see yourself in future? What are your goals and expectations?

Currently things are highly interrelated , I want them to be more organised. We are also moving towards linking people with disabilities to our group, through the NGO Swabhiman. We are also coming up with food chains including differently abled in employment. I also plan to develop a fitness programs in my resort itself.

A message for the younger sports enthusiast and social activists?

I would not say I am a very good example, but if you really want to change something in the society just take a stand for it. That is something I have been doing and facing consequences. You have to fight against people. In one way I am standing alone , yet it’s not a one man army thing. And I am happy that I am able to change a few things in my village. So, I wish to set a good example.