Dhenkanal: One of the premier media institutes in the country, Indian Institute of Mass Communication (IIMC), Dhenkanal celebrated its 25th Foundation Day on Thursday here. On this occasion, former Chief Secretary of Odisha and renowned author Dr. Subas Pani deliberated on the subject of ‘Fact, fiction and news’ and said that the role of young journalists has become more important these days as sensationalism has become the new mainstream in the news business.

Addressing the budding journalists, he said, “With the proliferation of technology, more people have been included in the news profession. The procedure of collection and distribution of news has become less formal and less professional. In the age of cut throat competition, there is neither time nor the willingness to verify the news or cross check the facts.”

“Even the mainstream news organizations are not hesitating to promote sensationalism. Hence, the distinctive line between tabloid and mainstream media is getting blurred every day. Influential and powerful media organisations are also indulging in yellow journalism. The role of a journalist becomes more important here,” he said.

Dr. Pani also pondered on the growing trend of fake news in his speech.

He said, “The recently emerged threat of fake news is becoming more dangerous with time. For the first time, the world witnessed its significance in United State’s presidential election of 2016, when some fake news websites consistently propagated lies.”

Head of IIMC Dhenkanal, Dr. Mrinal Chaterjee also inspired the students with his speech at the event.

He said, “IIMC Dhenkanal is a national institute with international repute. Here, we believe in journalism with a social cause. We believe that journalism can play an important role in shaping the future of the society and our students are doing exactly the same after passing out from here. They have not only excelled in their respective fields, but also stood out as examples.”

After the lecture, cultural programmes were also organised by the students of the institute. 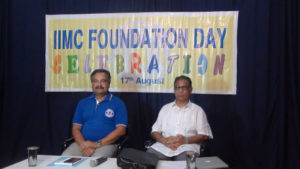 Earlier in the morning, Dr. Mrinal Chaterjee hoisted the institutional flag in the campus in presence of the students and the staff.

IIMC, Dhenkanal was established in August 1993 as the second campus of Indian Institute of Mass Communication, Delhi, an autonomous body funded by the Ministry of Information and Broadcasting, India with an objective of meeting the requirements of teaching, training and research in journalism and mass communication of the eastern region of the country. It offers post graduate journalism courses in English and Oriya.