Bhubaneswar: OSA’s 50th Convention held at Atlantic City, New Jersey, USA was attended by more than 1500 individuals which had various socio cultural events spanning over 3 days. As per the data accumulated this convention has been by far the largest single gathering of Odia diaspora in anywhere outside native land of Odisha. The convention showcased cultural talents from members within North America as well as accomplished performers from Odisha. The event was graced by presence of few of legends such as Pundit Hariprasad Chaurasia as the chief guest and Dr. Bhagaban Prakash as chief speaker. 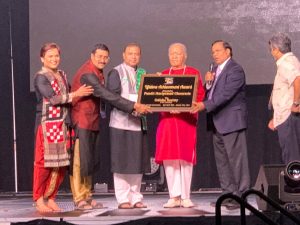 With the Golden Jubilee Convention of OSA, the organization and its leadership started thinking past the adolescent stage of the organization and started envisioning the purpose of the society for next few decades. The event also welcomed 4 new executives for the next 2 year term. Mrs. Kuku Das from California as President, Dr. Anil Patnaik from Ohio as Vice President, Mr. Vivek Das from Michigan as Secretary and Mr. Utkal Nayak from Maryland as Treasurer. The organization could not expect a team of executives who come from such a diverse background in terms of experience and background. The energy, enthusiasm and the inclusiveness are few of the characteristics of these officials at the first glimpse that excited members of the society during the General Body Meeting held on July 6th, 2019.

In her first speech as the President Mrs. Das expressed the team’s vision for the next 2 years to all the members of the society. Synergy, Engagement and Empowerment is the team’s theme. The newly elected President of the society emphasized the importance of the continuing upon the initiatives taken by the previous executive committee. Her vision for the Society was to be more inclusive to make decisions, bringing in more transparency and democracy to processes, create synergy through inclusion of various member segments such as by age group, location and preferences. Mrs. Das expressed her commitment towards the initiative of Senior care as the fraternity’s gratitude towards its founders and early days members who have devoted time and energy to build this solid platform to preserve the rich heritage of Odisha as well as put it on the growth path despite being far from the native land. Women Empowerment and connecting to the students/ immigrants those who are coming here for a better future will be the other areas, her team will be focusing on.

The team envision an OSA that will support generations to come, believes that the mission is to synergize, engage, and empower (SEE) tomorrow’s Odia leaders and visionaries, which is of utmost importance for a stronger and more advanced organization. They will accomplish this through the following actions: • Connect – transform OSA to be the bridge that connects generations • Outreach – facilitate promotion of Odia culture by developing strategies for cultural events, encouraging collaboration, and team up with both in-house and Odisha’s cultural icons in this endeavor • Youth Engagement – encouraging millennials to participate in social and cultural service projects of OSA to increase and diversify the decision making process • OSA 2.0 – advancing technological interfaces to bring the members for a more connected community.

Adding to the vision Dr. Patnaik, the newly elected vice president lost no time in engaging with newer chapters with relatively smaller amount of volunteers and geographically distributed chapters to be more empowered to unite the Odia diaspora as well as become part of the larger community. He emphasized his view point that the true heart of the organization lies not just within the big pockets of large population of the fraternity rather spread across the entire geographic distribution. Hence newer chapters should be empowered to be involved in active decision making as well as hosting events to be immersed into the mainstream.

The new executive team affirmed the belief that the shape of the society will be shaped by the next generation and have formed various committees to oversee initiatives with a diverse team of First and Second generation Odias. The objectives of the initiatives and the action plans were welcomed by the members as well as past executives with many extending their help to contribute to the initiatives.

The team further elaborated the mode of operations through frequent communication via multiple channels, by leveraging technology, by presence thought modern social platforms and through collaboration the organization would work towards bringing operational efficiency, effective engagement as well as growth in membership.

Dutee Chand wins gold in 100m sprint at the Universiade, the World University Games, in Naples