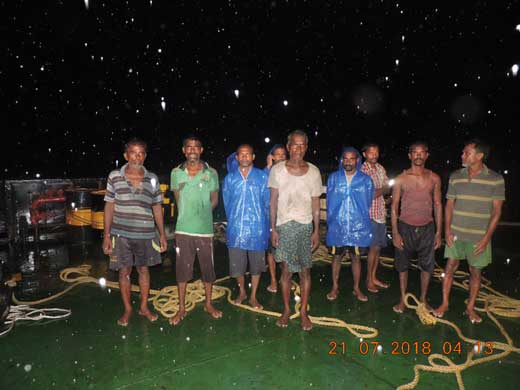 Dhamra: In a midnight operation by Dhamra Port team rescued crew members of local fishermen boat Maa Sarba Mangala boat of Chudamani village under Chudamani marine police station. Suddenly the engine was failed in the deep sea. After getting the information about missing of the fishermen at the turbulent sea and fighting for their lives, a team from Dhamra port immediately went for rescue operation with the help of a tug boat named ‘Baitarani’.

At midnight it took 2 hours for the search operation team to locate ‘Maa Sarbamanagla’ boat and rescued the fishermen as the sea was violent. Dhamra port along with district administration rescued all the fishermen and handed them over to the local police. Rescued fishermen were Sisir Kumar Malick, Bansidhar Malick, Rajendra Malick, Sindhu Malick, Abhimanyu Malick, Mayadhar Malick, Bimbadhar Malick, Purnachandra Das, Jaldhar Malick, and Nanda Malick belongs to Chudamani village of Basudevpur constituency.

Recently, a boat from Kashaphala, Balasore district capsized near Wheeler Island in which five fishermen rescued and one dead. All sort of help were extended to the rescue team for the operation handled by district administration and various agencies. This type of initiatives and supports for social issues, incidents are highly praised by fishermen communities, opinion leaders, villagers and district administration.