New Deli: Delhi-based Odia think tank the Institute for Promotion and Research on Odisha Culture and Heritage (Iproch) organizing 3 days Odia Theater and Film Festival NATYAPARVA – 2017 (ନାଟ୍ୟ ପର୍ବ – ୨୦୧୭ ) to promote the culture and heritage of Odisha. More than 150 artist from 7 theater group will play their Theater and 2 documentry movie will be released. The Theater Festival will start from 6th. October and continue till 8 October.

Eminent theatre troupes of Odisha to perform at the NCUI Auditorium in New Delhi. The program will be inaugurated by Union Ministers Darmendra Pradhan, Jual Oram and Dr. Maesh Sharma. 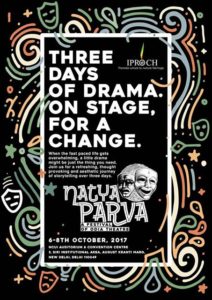 Program Schedule is below