Bhubaneswar: A survey team of the Indian National Trust for Art & Cultural Heritage (INTACH) has stumbled upon the ruins of an ancient temple which may date back to the 6-7th Century C.E and is among one of the very earliest temples of the Post- Gupta era. INTACH is conducting a detailed survey of the Ratnachira Valley and its monuments.

Like the Prachi, the mythical Ratnachira is on its death throes. Legend has it that Lord Rama had drawn the river to quench Sita’s thirst, using her pearl ring to chart its course. The ancient river, which now runs dry for most of the year, has many myths and legends with flourishing heritage on both sides of its short stretch.

The four member’s team led by Project Co-ordinator Anil Dhir, Research Assistant Deepak Kumar Nayak, Subhashish Dash and Suman Swain documented the ancient site at Biropurusottampur in Pipili Tehsil. The temple, which is by the side of another middle era Gateswar temple, is known as the Swapneswar Mahadev.

According to Deepak Nayak, it is in all probability an early stone temple. The region was a part of South Toshali area of the ancient Kalinga kingdom and finds mention in copper plate inscriptions of the post-Gupta period. The Kanasa plates of Sri Lokavigraha and Olasingh plates of Bhanuvardhana, issued in the 6th/7th Century C.E., throw light on worshiping of Maninagesvar (Shiva) and Naga Cult of the South Toshali region. Taking into account the material and style of this temple, it is evident that it was built at least 1300 to 1400 years ago, and is among the oldest intact temple in the region.

Anil Dhir, who had earlier completed the detailed survey of the Prachi Valley and the Ancient Jagannath Sadak, says that the temple’s ancient construction style says it all. He said that similar temples were seen in the Mahendragiri hill ranges of Southern Odisha. The square stone Khandolite stones blocks have no binding or cementing, they are placed one over other in symmetry to constitute the temple wall and roof. No evidence of iron clamps has been seen. The neatly chiseled blocks denote to an era when Kalingan traditional temple architectural style was in its infancy. The temple is devoid of any external embellishments on both the inner and outer walls; even the parsadevata niches are empty. 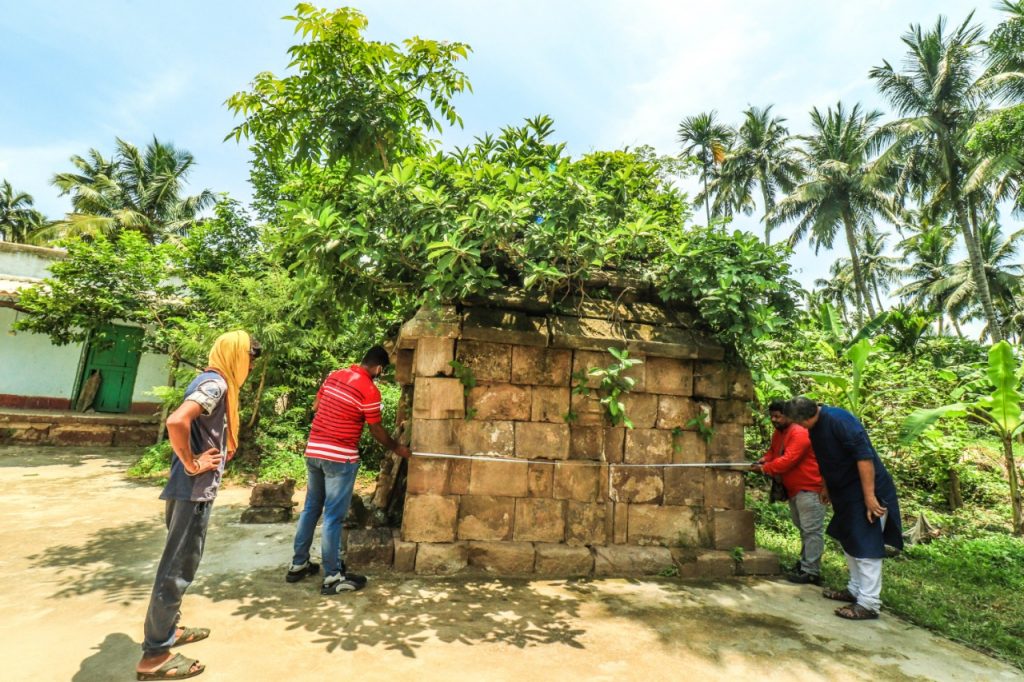 Unfortunately, this ancient monument is in a very precarious state and on the verge of collapse. Growth of thick vegetation on the top and the sides has caused severe damage. The thick roots have split the stone blocks and wide cracks have developed, the rear wall is dangerously leaning backwards. The Garbhagruha gets flooded because of the leaks on the roof. The entire temple may be crumble down anytime if proper measures are not taken immediately.

According to Dhir, like the Prachi Valley, the Ratnachira Valley too is a treasure house of many archaeological wonders, most of them being obscure and unknown as they have not been documented. A detailed survey is being undertaken by the team and many temples have been recorded, some of them in total ruins.

Deepak Nayak says that there is no information as to whether the State Archaeology or the Archaeological Survey of India has made proper surveys of the area. The Swapneswar temple has hitherto not been listed or documented. However, INTACH is committed to document and record all such ancient neglected monuments of the state and shall give the details to the concerned agencies about their finding, urging them to take proper conservation and preservation steps.