Bubaneswar: Bhubaneswar Cycling and Adventure Club (BCAC) is back with its Annual Flagship Cross-Country Cycling Expedition during September-October-2017. This ride termed as K2K (Kataka to Kathmandu) will flag-off from Silver City Cuttack on the occasion of Dussehra (from 28th September to 9th October 2017). To sensitize people of the twin-city and to make this event popular, BCAC in association with 22 Bikes and Riders from Cuttack has conducted a promotion-cum-sensitization ride from Bhubaneswar to Cuttack and back. A total of 25 riders joined this promotional ride from the twin-city (Bhubaneswar and Cuttack).

As planned, the ride started from the Club House at 6:15AM. The promotion vehicle with branding of Kataka-Kathmandu Ride followed the peloton on the entire route. We moved on a systematic 2X2 formation and it was a huge sight for the onlookers. We met with the riders from Cuttack at Trisulia Chowk and continued our ride on the Netaji Bridge to reach Cuttack. We moved through Sati Chowra, Sales Tax Chowk, Kanika Chowk, Tulsipur, Biju Pattnaik Chowk to reach the famous Barabati Fort. From the fort we moved to Christ College to savor “Dahi Vada – Alu Dum” – the signature dish of Cuttack. 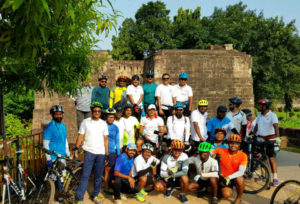 After enjoying an awesome breakfast, the peloton moved towards Samaj Office, Buxi Bazar, Dola Mundei Chowk to Ranihat, College Square and Cuttack City Railway Station. We returned back to Badambadi through Ranihat and Mangalabag then headed towards the National Highway to return back to Bhubaneswar. Near High-Tech Square we halted for a few minutes to savor delicious Dahi-Pana (A drink with Curd, Jal-jeera and chilled water). After this, all Cyclists returned to their respective places, covering a complete distance of more than 65 Kilometers.
This ride was another enjoyable ride for all the cyclists while promoting the Annual flagship ride of BCAC. This was also a moment of pride to show-off this International Cycling Expedition from Kataka to Kathmandu with all its colors.
BCAC wishes all its 09 riders all the best for this K2K Ride which is scheduled to commence from Thursday, 28th of September 2017.