Indianapolis: Bahuda, the return Ratha Yatra was celebrated with great zeal and enthusiasm at the Hindu Temple of Central Indiana (HTCI) on July 22nd, 2018, organised by The Jagannath Association of Indiana(JAI), USA. Sri Rajkishore Una is the main sponsor of the Jagannath temple of HTCI. It all started when the Sri Rajkishore Una (CEO of Gyansys Inc.) proposed for a bigger ratha to the temple officials. With a lot of support from the temple, a group of volunteers led by Sri Shiba Pattnaik started the ratha construction with help from Sri Srinibas Das and Sri Prabhat Nayak. The families worked very hard on the decoration part making Gyansys Inc. office warehouse as base. The individual areas of work were well distributed like media coordination by Smt Smita Patnaik, Puja arrangements by Sri Sanjay Una, Kitchen coordination by Smt Padmaja Una, Overall co-ordination by Sri Aditya Biswal and Cultural Programs coordination by Smt Laxmi Una. All the visiting parents like Sri Jayaram Una, Krishna Una and others blessed the occasion.

After Mangal Arati and Archana in the morning Pahandi began at 11 am with devotees carrying the deities from the temple to the Ratha on the Palki. The real excitement of the devotees could be seen with chants of “Jai Jagannath!” and reverberations of the ghantas. The HTCI executive president Mr. Krishnakumar Padmanabhan performed the Chhera Panhara. This marked the start of the Ratha pulling. People of all ages pulled the Ratha with a lot of excitement and passion around the temple building. After this, the deities were brought to the main Jagannath temple. The temple kitchen prepared a special Odia menu of rice, daal, bhajja, paratha, halwa for prasad sevan. Subsequent to prasad sevan, the cultural program started with a wide selection of acts which included singing bhajans, classical dances, Odia poems etc. Earlier in the Ratha Yatra day, the MC of the program was Smt Smita Patnaik and the vote of thanks was given by Sri Aditya Biswal. 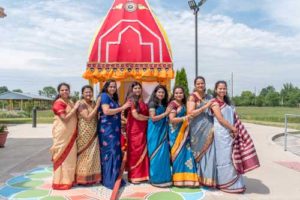 The Odia diaspora living in Indiana, USA feels blessed and privileged to be able to celebrate Ratha Yatra in spite of being far away from the homeland. The JAI group in collaboration with The HTCI officials and volunteers from the Indian community in Indiana made the celebration memorable. The manifestation of human fervor of devotion and collective celebration of Lord Jagannath across all kinds of people is the spirit of Ratha Yatra.Jai Jagannath.