In his address, the Union Home and Cooperation Minister said that the BSF ‘Prahari’ app is a great example of Proactive Governance. Now jawans can get personal information and information related to accommodation, Ayushmann-CAPF and leaves on their mobiles. Be it GPF, Bio Data or grievance redressal on “Centralized Public Grievance Redress and Monitoring System” (CP-GRAMS) or information on various welfare schemes, now Jawans can get all this information through the app and this app will also connect them with the portal of the Ministry of Home Affairs. Along with this, he congratulated the BSF Director General Shri Pankaj Kumar and his entire team for the awaited revision and update in 13 manuals which will increase the understanding of operations, administration and training and speed up the work. Shri Shah said that he is sure that this will facilitate the work of all ranks of BSF Jawans and officers. He said that these new initiatives will bring ease and convenience in the work of BSF.

The Home Minister said that the Border Security Force guards the most difficult border of the country. After Atal ji conceptualized ‘One Border One Force’, the responsibility of our borders with Pakistan and Bangladesh has come under the responsibility of BSF and the brave soldiers of BSF are manning these borders with great vigilance, strength and promptness as well as consistent efforts. He said that the security of the borders of the country cannot be ensured by pillars or fencing, but only by the bravery, patriotism and alertness of the soldiers standing on that border. On the occasion, Shri Shah said that being the Home Minister of the country, he would like to praise the bravery, vigilance and alertness of all the BSF personnels.

Shri Amit Shah said that Prime Minister Shri Narendra Modi has recently started the Vibrant Village programme. He urged all the Border Security Forces that through the Vibrant Village program, they should make efforts towards increasing tourism in the village, making the village self-sufficient with complete facilities. Shri Shah said that the security of the border can be ensured only when the border villages are populated. Along with the deployment of Jawans on the borders, only the patriotic citizens living in the village can provide permanent security and all the border guarding forces should strengthen it.

​The Union Home and Cooperation Minister said that the Border Security Force has a long history and has been honored with numerous gallantry awards including one Mahavir Chakra, 4 Kirti Chakras, 13 Vir Chakras and 13 Shaurya chakras. BSF has fought so many battles with such valour that a book could be written on each war. The Home Minister said that in the last 3 years, 26,000 kg of narcotics and 2,500 arms & ammunition were seized through BSF. He said that although the anti-drone technology on the border is still at the experimental stage, it has been successful to a great extent. Within the last 6 months BSF has shot down 22 drones on the western border, which is a huge achievement. Success is also being achieved against the drones carrying weapons to spread narcotics and terrorism with nefarious intentions. The Union Home Minister said that a “BSF Drone/UAV and Cyber Forensic Lab” has been set up in Noida, through which captured drones have been thoroughly mapped for their linkages and locations across the border. 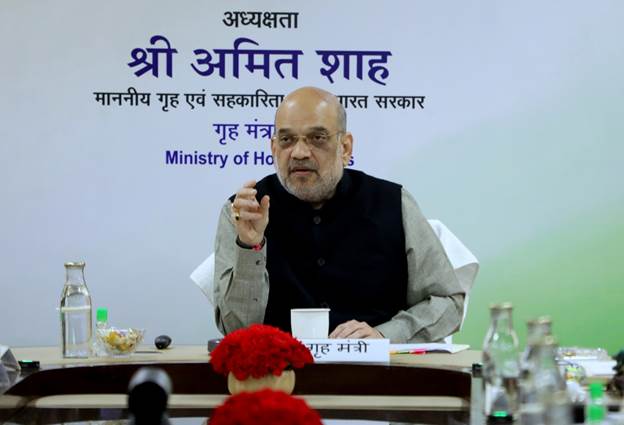 ​Shri Amit Shah said that fencing could not be done at some places on the border due to difficult topography. BSF has developed in-house technology for electronic surveillance there, the cost of which is very low and its efficiency is very high. Shri Shah said that BSF personnel have been able to secure the border with continuous vigilance. Construction of 140 km of fencing and about 400 km of roads has been completed in difficult places. Along with this, more than 120 border out-posts have been constructed. The Home Minister said that the Modi government takes care of the family of the Jawans with the same vigil with which BSF Jawans protect the country at the border by standing in temperatures ranging from – 40 degree to 46 degree. Shri Shah said that a new app has been created for housing and within 2 months of its launch, the housing satisfaction ratio has increased by 10%, which is a huge achievement. He said that this is also a great example of proactive governance.

The Union Home and Cooperation Minister said that the government has worked for the development of Border India. 9 Integrated Check Posts have been developed and 14 more are in the process of being built. The Home Minister told all the senior officers of BSF that it is necessary that in the border districts all the welfare programs run by the Government of India and State Governments be 100% implemented with the help of the District Collector. He said that if we equip those people, who are leaving the border villages, with the Pradhan Mantri Ayushman Bharat Yojana, then they get a reason to stay in the village. Along with this, if they are provided with the facilities of gas, electricity and drinking water, then they will also feel that someone is taking care of them and they should stay here. The Home Minister said that the initiatives taken by the Prime Minister Shri Narendra Modi to make the country self-reliant should be implemented with priority in the border areas, and in this the security forces deployed on the country’s borders, especially the BSF, have an important role.