Mohanty, who recently quitted the saffron party, was a BJP ticket aspirant to contest the Assembly polls from Cuttack-Barabati seat. 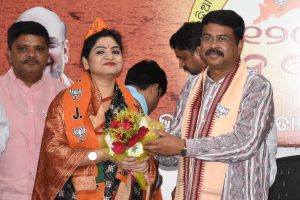 Former Congress leader Sonali Sahu joins BJP at party headquarters in Bhubaneswar; she had resigned from the Congress yesterday alleging irregularities in ticket allotment. She joined the party in the presence of Union Minister Dharmendra Pradhan.