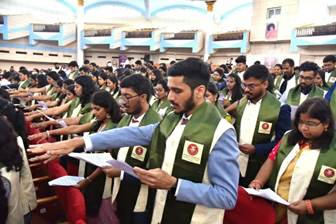 Congratulating the young doctors graduating today, Shri Bhupender Yadav said that while rendering medical services is one of the best ways to serve society, he asked to remember their alma mater as an institution which caters to the well-being of ‘Shram Yogis’ and hence work for their upliftment. The Union Minister of Labour & Employment said that the Government is committed to the modernization of all ESIC hospitals and accordingly a new Cathlab and Nuclear medicine lab have been provided for ESIC, Hyderabad.  He further informed that the State Government has been asked for land to construct 100 bedded hospitals at Ramagundam, Shamshabad and Sangareddy. 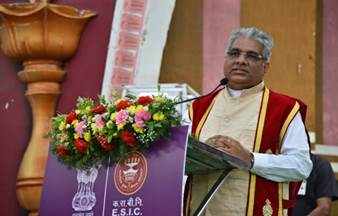 The Union Minister of Labour & Employment announced that the ESIC, for the first time, would be starting the courses for skilling workers for the works like paramedical jobs.  In order to address chronic shortage of manpower, in a short period of 8 months, 6400 vacancies have been advertised which include more than 2000 Doctors and Teaching faculty, he informed. Sharing that the E-Shram Portal has registered 28 crores workers, the Minister said that more portals have been introduced for monitoring of construction projects and vacancies.

Union Minister Shri Kishan Reddy, who is also the local MP expressed his happiness at the dedication of the personnel and quality of medical services the ESIC Hospital, Sanathnagar. Recollecting his previous visits to the hospital, he said that the ESIC hospital has rendered selfless service to not only to the ESIC beneficiaries but also to the general public during the Covid-19 pandemic. Earlier, the Union Minister of State for Petroleum & Natural Gas Shri Rameshwar Teli conveyed his greetings to the graduating MBBS students and exorted them to realise the vision of Swasth Bharat and Atmanirbhar Bharat.