FIH Men’s Hockey World Cup got off to a colourful start in the historic Barabati stadium in the millennium city of Cuttack in Odisha today.
The magnificent opening ceremony of the tournament was graced by Odisha chief minister Naveen Patnaik, Union minister of Information and Broadcasting and Youth Affairs and Sports Anurag Thakur, FIH President Tayyab Ikram , Hockey India President Dillip Tirkey and a host of national and international players and delegates.
Addressing the huge audience in the stadium, the Odisha Chief Minister welcomed the participants while thanking the Prime Minister Narendra Modi and the Govt of India for all the support extended to Odisha in hosting the World Cup.
The Union Minister Mr Thakur welcomed the players and delegates and said that hosting the FIH Men’s Hockey World Cup is a great moment for India. 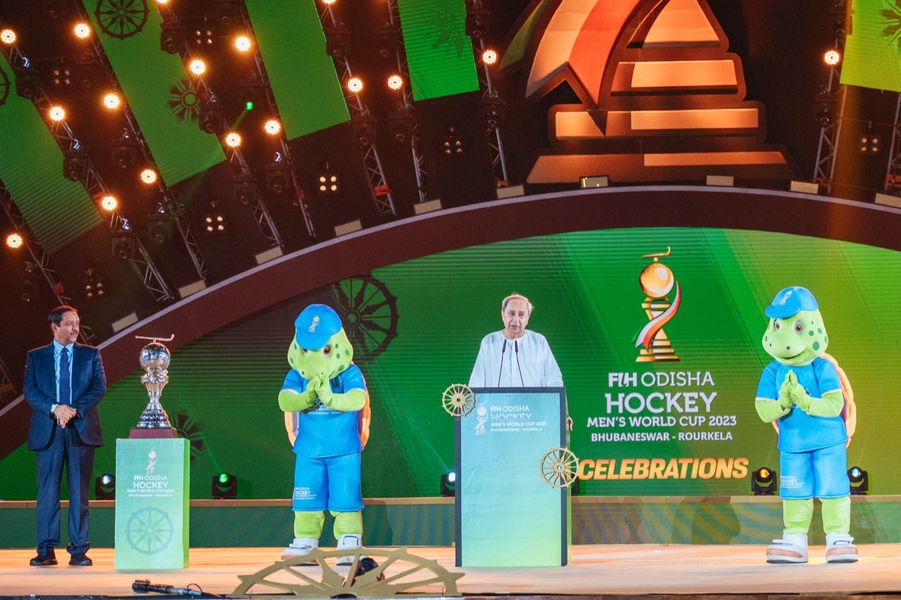 Stating that India has been a seat of hockey since long, the Minister Mr. Thakur reflected on how the Indian hockey teams have gifted to the nation the prestigious Olympic gold cups in hockey, three times each, both before independence under the hockey legend Major Dhyan Chand and under another hockey legend Balbir Singh Senior after independence.
He said, while the Indian govt has been doing its best to promote sports and games in the country including hockey, the states are also contributing immensely, in the true spirit of cooperative federalism.
Stating that the Prime Minister Narendra Modi himself is a great sports lover, the Minister said India under his leadership extended all support to the Indian hockey team even during the tough time of Covid pandemic which resulted in India winning the bronze in the 2022 Tokyo Olympics.
He thanked the chief minister and the govt of Odisha for having gifted a world class hockey stadium not only to Odisha but to the country as a whole.
He called upon the enthusiastic audience to create history from out of the FIH hockey Men’s World Cup that begins from coming Friday in both Capital Bhubaneswar and Rourkela.