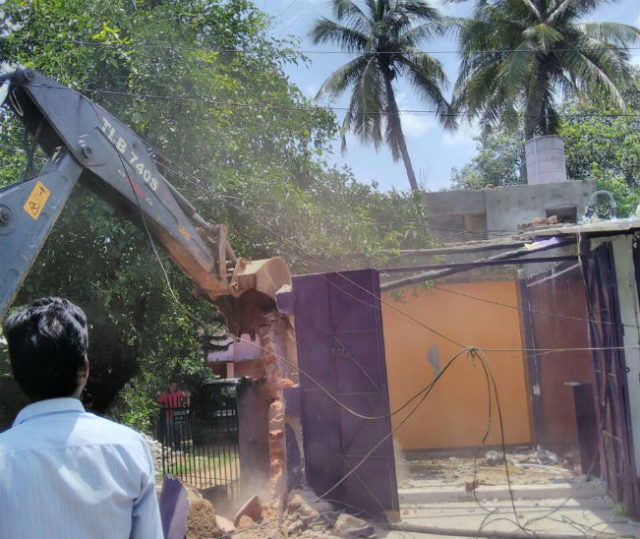 Bhubaneswar: As per the schedule the Joint Eviction Team of the Central Eviction Monitoring Cell (CEMC) comprising personnel from BMC and BDA rushed to the spot for eviction of unauthorised encroachments along public road leading from Odisha Blind Association to PHEO Office near Hotel Hindustan International (HHI) via Text Book Press, in Unit-III, where yesterday an eviction was carried out in Kharvel Nagar area of the city.

The programme started at 10.30 am and went up to 2.30 pm in the afternoon. For the removal the initiative was taken by Zonal Deputy Commissioner (South East), Binay Kumar Dash, in order to make the city clean and remove unauthorised structures from drains and other areas blocking natural drainage outlets of rain water. In Kharvel Nagar today, during the exercise six tin sheet extensions, eight wooden cabins and 12 numbers of shops of the scrap dealers. One excavator from BMC was engaged in the drive.

Similarly under the South West Zone of BMC an eviction was also carried out by the joint team of BMC and BDA. While near Delta Square area two illegal shops were removed by the squad, at the junction point of K7, K4 and K3 areas under Kalinga Nagar area unauthorised structures from near a bus stop was removed. For this eviction requisition was given by Zonal Deputy Commissioner Dipti Rani Sahoo.
AWARENESS DRIVE: In the same zone (South West) today, apart from the eviction drive an awareness meeting for Individual House Hold Latrines (IHHL) was conducted at Mangala Basti under Ward No. 46 to make people aware on cleaner surroundings and building a better city.