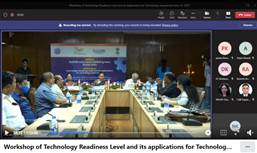 In her inaugural address Prof. Ranjana Aggarwal stressed the need for assessing the Technology Readiness Level (TRL) of the research that is being carried out in various laboratories. Often there is a gap between technology developers and technology users. She explained the efforts made by CSIR-NIScPR in assessing the TRL of various technologies developed at various CSIR laboratories across the country. The institute has so far prepared the assessment of  467 technologies having TRL 6 and above. Prof. Aggarwal mentioned that because of the initiatives of the Government of India, in recent times, there has been a paradigm shift in policy formation towards innovation. India sees the emergence of the 100th unicorn Today, 1 out of every 10 unicorns globally have been born in India. Since the launch of the Startup India initiative on 16th January 2016, more than 69,000 startups have been recognised in the country, out of which 100 are in the unicorn category. She remarked that science must be focused to serve society and assessing the TRL of technologies developed in our research institutions is important to achieve this.

Dr. Sujata Chaklanobis, Advisor/Scientist-G, Head (PACE, CRTDH & A2K+), DSIR, explained the need for assessment of the readiness level of technologies. The TRL is used to assign maturity levels of technology. She explained the importance of TRL by highlighting a case study on P&G. Studies for identifying technologies with TRL 6 and above was done by DSIR and these technologies have potential for commercialisation. 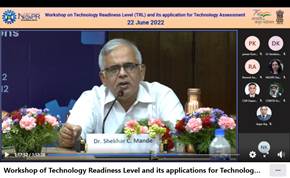 The Chief guest, Dr. Shekhar C. Mande, Former-Secretary, DSIR and Former Director General, CSIR stressed that whatever research our labs are doing, everything should be evaluated by its TRL. Even though science and scientific discoveries are universal, their implementation is mostly local. He reminded the success of the milk powder production in the country. Even though different branches of science have different ways to assess the TRL, the basics remain the same. It is often observed that there is a gap in the assessment between fundamental science and engineering. If public aspirations must be met, the scientists and industrialists should work together. 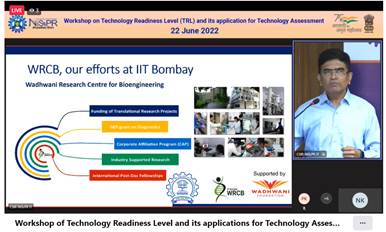 Technical sessions followed the inaugural session. The first technical session on “Strategies for TRL Scouting in select sectors” was chaired by  Dr. Sujata Chaklanobis, Scientist-G, DSIR. Dr. Anjan Ray, Director, CSIR-IIP, Dehradun delivered the invited talk on “Adventures in Translational Research.” He insisted on the study of Industrial psychology, organisational behaviour, clinical research, market research, cash flow and other soft challenges. He further mentioned the idea of small startups which want to productise the concept, despite having a crunch of cash flow, and they may not necessarily focus on the end market, rather their motivation is on brand building and networking. Dr. Anjan highlighted the need for TRL self-auditing – key questions must be answered to move along the TRL lines and evidence of data for TRL self-assessment must be available. 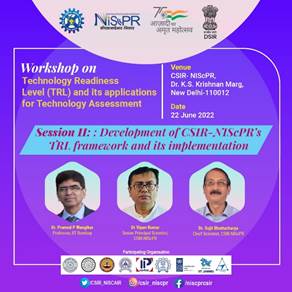 The lecture was followed by a session on sharing of methodology and action plan by 6 PIs for carrying out their studies on “Techno-commercial assessment of TRL-6 and above technologies developed in India in academia, research labs and industry”. Dr V.Rajkumar  from  IIT Jammu , Dr B R Basak, Scientist, TIFAC, Dr Ramesh Andnarbum, IIT Roorkee, Dr Manjusha, IIT Delhi, Mr C Sripati, ICCW, IIT Madras, and Dr Shashank Bansal from IIT Dhanbad shared their plan of action for translational research in specific areas and challenges they faced. The session concluded with the closing remarks by the chair Dr. Sujata Chaklanobis. 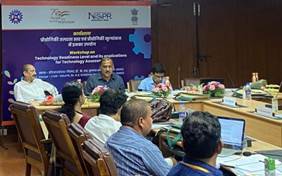 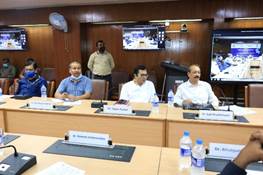 The technical session was followed by an interactive session and panel discussion on approaches towards scouting and assessment of TRL-6 and above technologies. Dr. Mrutunjay, Director General -R&D, KIIT University & CEO, KIIT chaired the panel discussion.