New Delhi : The Union Minister for Agriculture and Farmers Welfare, Narendra Singh Tomar, today visited the Central Institute of Horticulture in Nagaland and inaugurated a farmers workshop and exhibition. Speaking on the occasion, Shri Tomar said that the Central Government and the State Governments are working together for the development of the North East Region including Nagaland.

“The Prime Minister, Shri Narendra Modi, wants that there should be holistic and balanced development and the benefits of the government’s schemes should reach the eligible people including farmers right down to the grassroots level, which will improve their standard of living. The Central Government is dedicated towards this and will continue to do so. For the development of Northeast, the Central Government will continue to walk step by step and shoulder to shoulder with the States. It is necessary to transform agriculture into advanced farming for the benefit of the farmers in the country including the Northeast,” he said.

In the programme organized by the Central Institute of Horticulture (Medziphema, Dimapur), the chief guest Shri Tomar said that if the Central and State Governments work together, then its results are bound to be good, and this is what is happening now. Emphasizing on increasing production and productivity, Shri Tomar said that the income of brothers and sisters working in the agriculture sector should also increase, for this they should shift to remunerative crops, connect with technology, bring new technology to the farmers through R&D institutions, the common farmers should get the benefit of the scientific research and government funding should also reach them. “The Central Government under the leadership of Prime Minister Shri Modi is working closely with the State Governments on all these issues,” he said.

Shri Tomar expressed the hope that the farmers of this region will lead a new revolution in the development of horticulture. “The North-East Region has been a victim of neglect for a long time and due to its remoteness, it became difficult to get the benefits of schemes here, but after becoming the Prime Minister, Shri Modi has constantly paid attention to get enough funds for the development of the North-East, ensured the Union Ministers visit this region regularly, the Prime Minister himself also came here several times so that the problems of the region continue to be resolved by the Government of India,” he said.

Shri Tomar assured that the Central Horticulture Institute will remain here, it will not shift anywhere, there will be no shortage of funds for this and the Central Government will leave no stone unturned in its development.

Shri Tomar said that by virtue of 6 agro-climatic zones with vast geographical variations present in the North-East Region, and Nagaland in particular, it has the potential to provide considerable scope and advantages for growing many horticultural crops as compared to other states.

“There are huge possibilities. Nagaland also has great potential for export of agricultural products due to its proximity to South-East Asian countries, it is necessary to increase productivity and ensure that the quality of agricultural products is of global standards. As a result, farmers will get good price and their financial condition will improve and the agriculture sector will also contribute more to the country’s GDP,” he said.

Shri Tomar said that everyone is making efforts together to bring new technology to the farmers at low cost, he appreciated the efforts of the institute and the State Government in this direction. 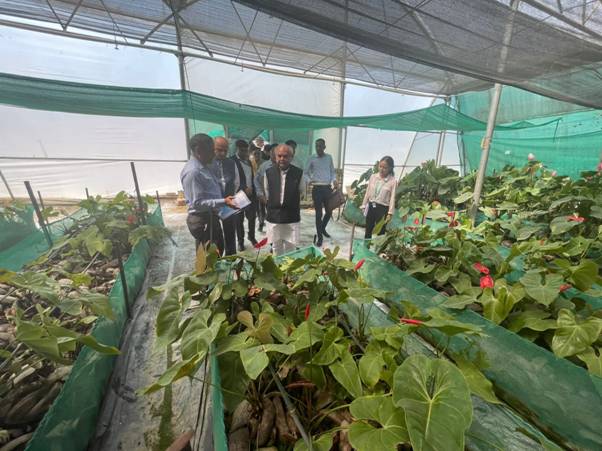 The Agriculture Minister of Nagaland, Shri G. Kaito also addressed the gathering and spoke about the development of agriculture in the state. Central Horticulture Commissioner Dr. Prabhat Kumar delivered the welcome address. Vice Chancellor of Central Agricultural University, Imphal, Dr. Anupam Mishra, Director of the Institute and Additional Commissioner (Horticulture) of the Union Ministry of Agriculture and Farmers Welfare, Dr. NK Patle along with senior officials of Central and State Governments, farmers and representatives of FPOs and entrepreneurs were among the dignitaries present on the occasion.