In India, as in other parts of the world there are several festivals around water bodies- rivers, lakes, sea. Chatt (called so as it is celebrated six- chhe, in Hindi days after Diwali), celebrated across Bihar and wherever there are Biharis- is one.

Former bureaucrat and author Jawhar Sircar writes that “Chhatt is the first celebration of bright light and the sun, after the blackest night of the year, ie, Kartik amavasya when Indians light billions of lamps to dispel the dark.” 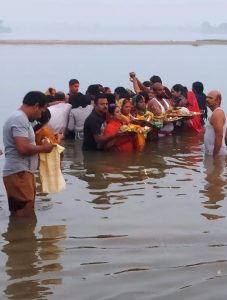 Chhatt Puja was originally a women’s festival to thank the sun god for all the munificence and the bounty conferred, but it is interesting to note how the menfolk joined later on. They also worship a goddess called Chhatti Maiya, who is equally important and invoked for her boons. She is sought to be identified with Usha, the Vedic goddess of dawn — but these are just weak attempts to sanskritise a popular utsav.

The unique character of this festival is that it worships both dawn and dusk, the rising sun as well as setting sun. It is actually a four day festival that starts on the fourth lunar day after the dark amavasya of Kartik, namely, Chaturthi, Panchami, Shasthi or Chhatt and finally Saptami. Chhatt Puja is the occasion for the most colourful dresses to come out and there is a lot of folk songs and dancing as well. Even in distant Mauritius, for instance, Chhatt songs and dances are an integral part of the nation’s culture that was brought in by labourers from Bihar. As fasting is mandatory, people take anticipatory steps by consuming a lot of freshly reaped rice, puris, bananas, coconuts and grapefruits before beginning their rituals.

Chhat like rajo in Odisha, was and remains essentially a very vibrant folk festival, that has no role for the priest and no compulsion to visit temples. There are however, some stories around Chhat linking its origin to mythological stories. Draupadi was advised by the sage, Dhaumya to perform Chhatt puja to Suryadev, to help the Pandavas. There is another legend that Rama and Sita also offered this puja to the sun god during this period of the year when they returned from exile to Ayodhya.  Sita’s origins were in Janakpur of Mithila, which is really the epicentre of this worship. The tradition is, however observed all over in Bihar-Jharkhand and adjoining regions, the Madhesh tract of Nepal, as well as in far off Fiji, West Indies and Mauritius: wherever Biharis went.

Chhat initially was a folk festival. Brahmans usually stayed away from this economically unviable festival. Nowadays, however, hordes of priests have started occupying vantage points in the water and ritualized  the otherwise simple festival.

What benefits does this puja confer? Many believe in it as a fertility rite for both humans and harvests, while other swear by its curative powers. There is also a theory that ancient yogis and rishis obtained energy directly from the sun’s rays by exposing their bodies to the sun, while on fast. When one observes how when other events and pujas damage or  destroy the environment with chemical paints and other poisonous substances, that include firecrackers, Chhatt stands out as a really commendable environment-friendly worship that uses only bio degradable items.

Kathachampa in Odia, Kathchanpa in Bengali, Frangipani in Hindi and Nepali, Plumeria in English, these flowers are indigenous to Mexico, Central America and the Caribbean, and as far south as Brazil and north as Florida, but are grown as cosmopolitan ornamentals in warm regions including our campus in Dhenkanal, Odisha and in most parts of India. 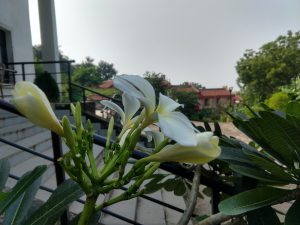 Among the Maya, plumerias have been associated with deities representing life and fertility. However, in Philippines, Indonesia and Malaysia, the plumeria is often associated with ghosts and cemeteries. See the differences a simple nice looking flower can evoke.
Photo by Soumya Ranjan Bihara.

Suddenly there are a slew of films on hair. To be specific, receding hairline of young male. There is this Ayushman Khurana starrer Bala, and then Abhishek Pathak directed Ujda Chaman and a telefilm Gone Kesh. There is even an Odia film titled Bala.

One day Aryabhatta sat at home and started counting the friends who are not afraid of their wives.

That’s how he invented zero (0)

Years later Ramanujam started counting the number of people who are afraid of their wives.

That’s how “infinity “was invented.

Ever since Americans stolen the underwear of Al Bagdadi to confirm his DNA, Hafiz Syed deployed 10 guards to protect his underwear and  Gen Bajwa moved one step ahead and stopped wearing under wears.